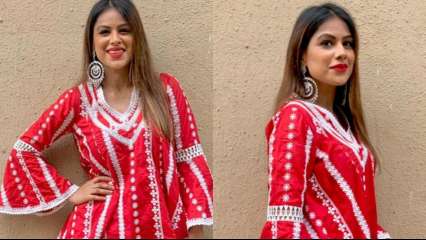 Nia Sharma has recently been making news for her beautiful and sensual photographs. Despite the fact that she has been subjected to a great deal of criticism, the actress has remained unflappable. She posts whatever makes her feel at ease. Nia has worn everything from backless tops to the hunter style outfits.

For Raksha Bandhan, Nia Sharma is dressed in a red sharara. Her photographs also included a picture of her and her brother.

Take a look at the photos here-

Nia’s sensual photos have also been generating a sensation recently. Her backless top photos and video went viral, and she faced a lot of wrath as a result of it.

Nia’s career took off after she was cast in the lead character of Manvi Chaudhary in Star Plus’s ‘Ek Hazaaron Mein Meri Behna Hai.’ In Zee TV’s ‘Jamai Raja,’ she plays Roshni Patel. She established herself as a major and popular actor with roles such as Aarohi Kashyap in Colors TV’s thriller ‘Ishq Mein Marjawan’ and Naagin Brinda in Colors TV’s supernatural vengeance series Naagin: Bhagya Ka Zehreela Khel’. She also appeared in the reality stunt show ‘Khatron Ke Khiladi 8’ in 2017 and made her digital debut in the same year with Vikram Bhatt’s online series Twisted. In March 2021, she made her most recent appearance in the second season of her web series .Jamai 2.0’, which launched on ZEE5.

Akshay Kumar gains weight for ‘Raksha Bandhan’, talks about how he ‘enjoys the process’