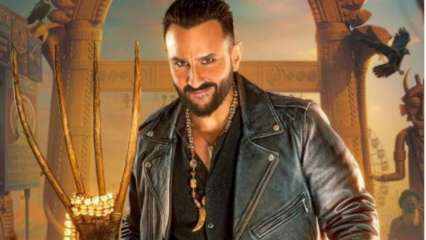 Actor Saif Ali Khan has found himself in the middle of yet another controversy after his latest poster from the upcoming film ‘Bhool Police’ did not go down well with the netizens.

For the unversed, on Monday, Saif Ali Khan’s first look as ghostbuster Vibhooti from the upcoming film ‘Bhoot Police’ was revealed. The ‘Cocktail’ star’s wife and actor Kareena Kapoor Khan shared his first look from the horror-comedy on social media. Kareena took to her Instagram account to share the first look poster of Saif’s character. Sharing the character poster of Saif from the film, Kareena captioned it in a quirky way.”Don’t fear the paranormal and feel ‘Saif’ with VIBHOOTI. #BhootPolice Coming soon on @disneyplushotstarvip,” she wrote.

Sporting a leather jacket paired with a black shirt, the poster features Saif in a cool yet intriguing avatar. In the first look poster, Saif is seen holding a weapon that seems to help him in catching ghosts.

However, what caught’s netizens eyes was the Hindu saint in the background. And that did not go down well with netizens who lashed out at the makers and the actor for hurting Hindu sentiments.

Several social media users took to Instagram to call out the presence of the Hindu saint in the poster. While a section of users alleged that it is an attempt to defame Hindutva, others appealed to boycott Saif’s movie.

Take a look at some tweets here:

In the #BhootPolice poster …why the Hindu sadhus been displayed.. why not paster or clerik..

Hope #SaifAliKhan not been learnt from Tandav…

#SaifAliKhan is real #Bhoot. He was part of #Tandav web series which was Boycotted being against #Hindutva. He is kind of 3rd class actor who even don’t deserve to be in role of Rawan in #Adipurush #BhootPolice pic.twitter.com/pX2TNGZqCr

This is not the first time Saif has been embroiled in a controversy over allegedly hurting Hindu sentiments with his body of work. Earlier, his debut web series ‘Tandav’ too faced social media ire for the same reasons.

The forthcoming horror-comedy was earlier scheduled for a theatrical release on September 10. However, the makers reportedly confirmed its digital release in June.

‘Bhoot Police’ was shot in Himachal Pradesh late last year. The upcoming film is helmed by Pawan Kripalani, who has earlier directed films like ‘Ragini MMS’, and ‘Phobia’.The film will trace the story of a group of ghost hunters and their hilarious adventures. ‘Bhoot Police’ marks the first collaboration between Saif and Arjun, who is currently dating Kareena Kapoor’s best friend and actor Malaika Arora. The upcoming film is produced by Ramesh Taurani and Akshai Puri.

Apart from ‘Bhoot Police’, Saif will also be seen in Prabhas’ ‘Adipurush’. In Om Raut’s directorial, Saif will play the role of Ravana. Saif, who last appeared in the Amazon Prime Video series ‘Tandav’, also has ‘Bunty Aur Babli 2’ in the pipeline.