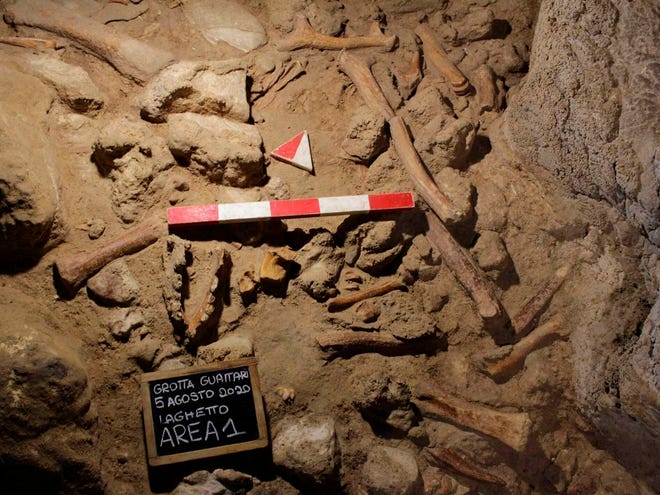 Archaeologists have discovered the fossilized remains of nine Neanderthals in a cave near Rome, the Italian Cultural Ministry announced.

Culture Minister Dario Franceschini called the finding “an extraordinary discovery that will be the talk of the world because it enriches research on Neanderthals.”

Most of the Neanderthals had likely been killed by hyenas and then dragged back to the cave they had transformed into their den, according to the Guardian. Once inside, the animals consumed their prey.

“Neanderthals were prey for these animals,” Mario Rolfo, professor of archaeology at Tor Vergata University, told the Guardian. “Hyenas hunted them, especially the most vulnerable, like sick or elderly individuals.”

The remains are of seven adult males, a woman and a boy.

The fossils, which were discovered at the Guattari Cave in San Felice Circeo about 60 miles from Rome, include skulls, skull fragments, two teeth and other bone fragments. Many of the bones found show clear signs of gnawing, the culture ministry said.

In addition to abundant hyena remains, the remains of groups of large mammals were found in the cave, including aurochs (a large extinct bovine), rhinoceroses, elephants, giant deer, cave bears and wild horses.

In the statement, local director of anthropology Mario Rubini said the discovery “will allow us to shed an important light on the history of the population of Italy.” He said the large number of remains suggest a significant population of Neanderthals, “the first human society of which we can speak.”

Neanderthals, the closest ancient relatives of humans, died out about 40,000 years ago, Reuters said. It is unclear what killed them off, although theories include an inability to adapt to climate change and increased competition from modern humans.