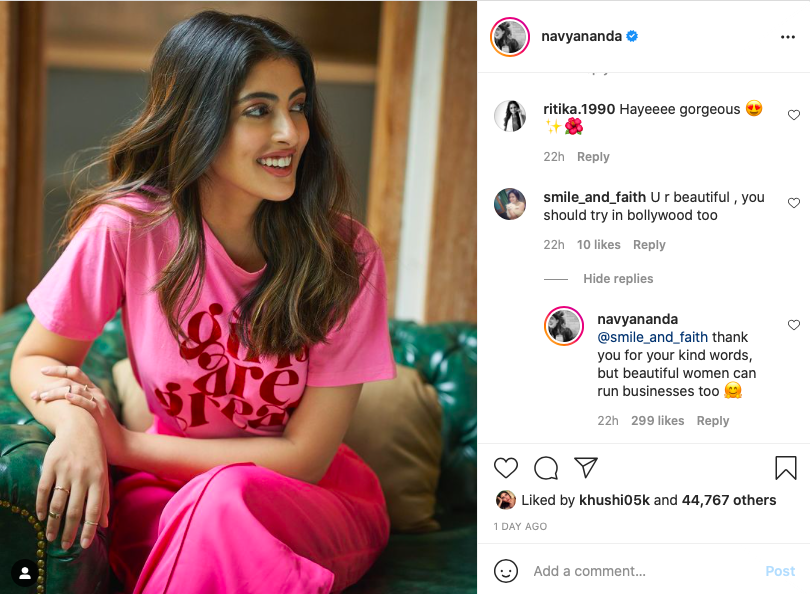 Amitabh Bachchan and Jaya Bachchan’s granddaughter Navya Naveli Nanda despite being from a Bollywood family chose to follow her dreams and become an entrepreneur. Navya uses her social media platform and her huge fan following to promote social causes raise awareness on critical issues like women’s health and gender equality.

Navya often shares snippets of her personal and work life on her Instagram handle. On Wednesday (July 28), she treated her fans with a gorgeous photo of hers. In the photo, Navya can be seen smiling in a pink t-shirt paired with pink pants. She shared the photo with sunflower emoji as a caption.

Fans showered love and praises on Navya’s photos. However, there was one comment that stood out, enough to get Navya’s attention. “U r beautiful , you should try in bollywood too,” a user commented. Responding to it Navya gave a sassy reply. She wrote, “@smile_and_faith thank you for your kind words, but beautiful women can run businesses too.”

Navya’s reply won the hearts of netizens who complimented her for her beauty and skills. “Absolutely… The biggest entrepreneur award will b coming ur way soon,’ wrote a user on Navya’s comment. Another user wrote, “Can’t agree more. You’re such an inspiration to many. Continue doing what you are doing.”

A diva in her own right, Navya is the co-founder of Aara Health, an online platform for women to discuss health issues she recently launched a campaign ‘Project Naveli’, that aims at fighting against gender inequality in India.

Talking about the same, Navya in an earlier interview with Vogue India said, “I want to use the resources, people, privilege and platforms that I have to spread awareness and bring change. Studying abroad, I found the women there far more emancipated. I want women in India to feel the same way, to be given similar opportunities. I want them to be masters of their own destiny and take charge of their own lives. I’ve grown up around working women in my family—it’s all I’ve known. To bring that change, you have to start with education and financial independence. That’s where Project Naveli comes in.”

Navya is also all set to start working with her father, Nikhil Nanda, in the family business (Escorts Limited). Opening up on being the first woman in the family to take over the reins of the business soon, Navya said, “I would be the fourth generation of the family taking the lead—and the first woman. It is a great sense of pride for me to be carrying forward this incredible legacy left behind by my great-grandfather HP Nanda.”