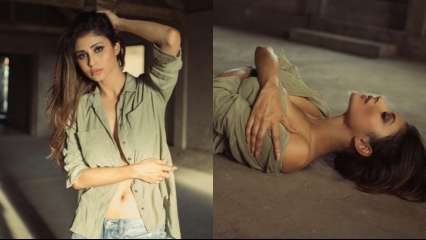 Mouni Roy is known for her sexy and sultry look. This 35-year-old diva is also a star in the digital realm. With her incredible fashion sense and attractive beauty, she is gaining millions of hearts every day.

Mouni posted  photos from her latest bold photo shoot in an old unoccupied room setup . She wore an open-button olive green shirt that showed off her incredibly toned body. She dressed up the appearance with a pair of distressed blue denim pants that are bringing the heat.

She went for a natural look with her makeup. She wore her hair down and sleek. She also captioned the post as “Live the mystery don’t try and solve it..” and captioned another post as “Write me of hope and love, and hearts that endured.”

Take a look at her posts here-

With her depiction as Shivanya, a shape-shifting serpent in Colors TV’s supernatural drama ‘Naagin 1’ (2015–16), she established herself as one of the highest-paid Hindi television actresses. She appeared in a cameo appearance as Shivanya’s offspring Shivangi, another shape-shifting serpent, in the show’s sequel ‘Naagin 2’ (2016–17). She received overtures from Bollywood after ‘Naagin’, and she made her Hindi film debut in Reema Kagti’s sports drama ‘Gold’ (2018), which was a critical and economic success and earned her a Filmfare Award nomination for Best Female Debut. She debuted as a singer in 2019 with the remake of ‘Bheegi Bheegi Raaton Mein’.

For the unversed, Mouni Roy is currently working on a number of projects, including ‘Bole Chudiyan’, ‘Mogul’, and ‘Brahmastra’.