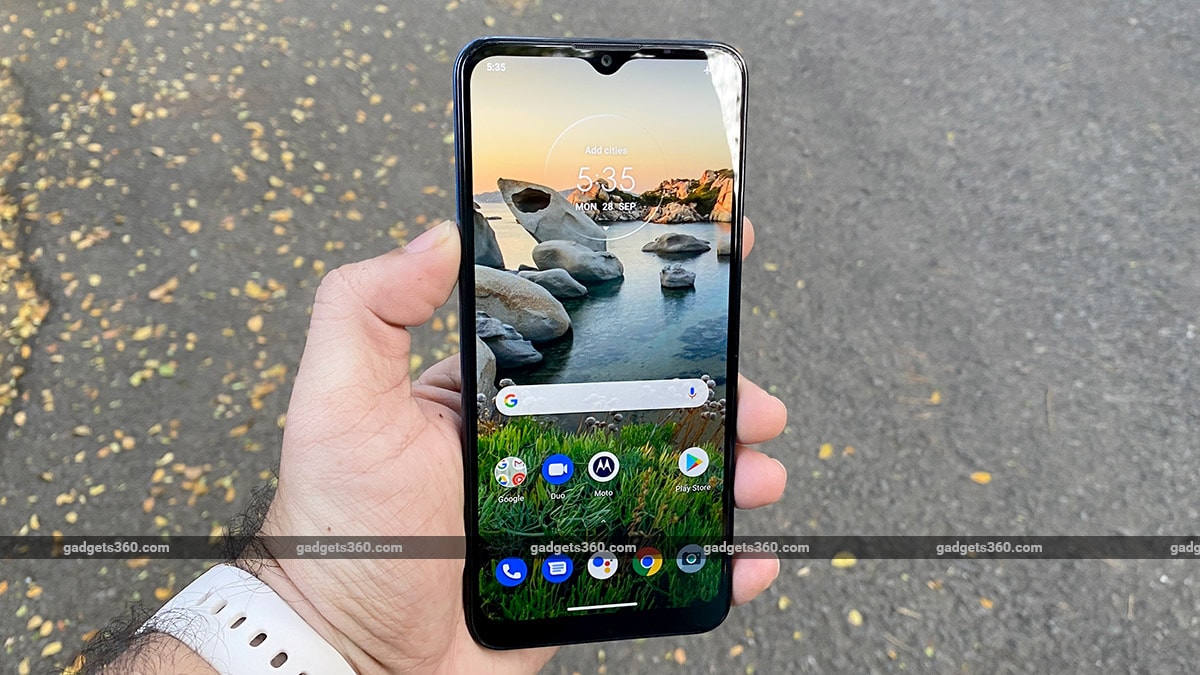 Slowly and steadily, Motorola has been bringing new smartphones to India. The budget E-series, which has been overshadowed by the popularity of Moto’s mid-range offerings, has now gotten a new addition in the form of the Moto E7 Plus. This new low-cost phone looks good, and the specifications do seem interesting, especially when you consider its Rs. 9,499 price in India. However, the Moto E7 Plus does have a few shortcomings that could make potential buyers think twice. Curious to know what they are? Keep reading my review of the Moto E7 Plus to find out.

In my first impressions of the Moto E7 Plus I did mention that this device reminded me a lot of the Moto G9. Yes, the design is very similar, and there are a few things that I like about the Moto E7 Plus. The first has to be the Misty Blue colour of my review unit. Smartphone manufacturers usually opt for solid colours on budget devices but this gradient finish helps the Moto E7 Plus stand out. Motorola has flattened the sides of the Moto E7 Plus just like it did with the Moto G9, and the frame curves gently towards the back. This helps grip the phone quite well.

You get a 6.5-inch display with a dewdrop notch at the top for the selfie camera, which sits right below the thin earpiece. Bezel thickness is acceptable for the price but you will notice that the chin is thicker than the sides. Motorola’s placement of the power and the volume buttons is quite good as these are easy to reach while holding the phone single-handed. The power button has a textured finish which is easy to distinguish purely by feel.

The Moto E7 Plus has a dedicated Google Assistant button

There is also a dedicated button to summon the Google Assistant. It is positioned on the same side above the volume buttons. The right side of the Moto E7 Plus looks cluttered with buttons while the left only has the SIM tray. Positioning the Google Assistant button on the other side would have been better in my opinion.

Motorola has opted for a dual-camera setup on the Moto E7 Plus which sits right above the perfectly positioned fingerprint scanner. This camera module doesn’t protrude much. The top of the Moto E7 Plus is bare.

One thing that stands out on the spec sheet is the Qualcomm Snapdragon 460 SoC. This isn’t the first smartphone with this new SoC in India, but it is the first one I’ve tested. The Qualcomm Snapdragon 460 is an octa-core SoC based on a 11nm process and clocked at 1.8GHz. Motorola has only launched the Moto E7 Plus in India in one configuration, with 4GB of RAM and 64GB of storage.

I like the MyUX skin that Motorola ships on top of Android 10, as there are only very minor additions on top of stock Android. My review unit had the September Android security patch which is currently the latest. Moto Actions let you interact with the device using gestures. You can perform a double-chop action to turn on the flashlight or touch the screen with three fingers to take a screenshot. A few of the Moto Actions that I used on the Moto G9 (Review), such as the camera quick-launch gesture, are missing on this device reminding me that the E7 Plus is an entry-level model. Gesture-based navigation is enabled by default and you can swipe down on the rear-mounted fingerprint scanner to show the notification shade. Motorola has kept preinstalled bloatware to a minimum, and you only get Facebook installed along with a few apps from Google.

Moto E7 Plus performance and battery life: Not my Type-C

I did not notice any slowdowns while using the Moto E7 Plus for a week. With 4GB of RAM, multitasking isn’t an issue, and I could switch between multiple apps very easily. I found face recognition as well as the fingerprint scanner to be very quick to unlock the smartphone.

You get a Micro-USB port on the Moto E7 Plus

The display has good viewing angles and gets bright when outdoors. I ran the AnTuTu benchmark on the Moto E7 Plus and it managed 143,024 points. In Geekbench’s single-core and multi-core tests, the Moto E7 Plus scored 253 and 1157 points respectively, while it managed 36fps in GFXBench’s T-Rex scene.

Gaming performance on the Moto E7 Plus is decent and I could play Call of Duty at Medium graphics quality with the frame rate set to High without any issues. I played the game for 15 minutes, and noted a 3 percent battery level drop. The Moto E7 Plus only got slightly warm to the touch. Casual games run fine and the device does not get warm while playing titles such as Among Us.

Battery life is very good on the Moto E7 Plus. It went on for 18 hours and 23 minutes in our HD video loop test. With my usage, I did get about a day and half worth of use before needing to plug it in to charge. The lack of a USB Type-C port is disappointing but Motorola isn’t alone in this; even Xiaomi has gone back to using a Micro-USB port with the Redmi 9 (Review).

If your existing smartphone has a Micro-USB port, you won’t face any issues, but those who are now used to Type-C devices might miss the convenience. Moto has bundled a 10W charger with the Moto E7 Plus, and it is relatively slow. It charged the phone to 22 percent in 30 minutes and 43 percent in an hour. Charging it completely takes over two hours. Sadly, there is no support for faster charging.

Motorola has gone with a dual-camera setup for the E7 Plus. The 48-megapixel primary camera has an f/1.7 aperture and uses the same sensor as the Moto G9, which is a little surprising. Along with this primary sensor, Moto has used a 2-megapixel depth sensor. For selfies, this phone has an 8-megapixel sensor with an f/ 2.2 aperture.

Motorola’s camera application is very easy to use and I did not face any issues with it. The photo mode gives you the option to try out manual controls for ISO, focus, white balance and exposure.

Daylight photos turned out well and had good detail with adequate sharpness. The phone automatically enabled HDR for bright scenes and was quick to take shots. With close-up subjects, it produced sharp results while adding a soft blur to the background.

Portrait mode puts the depth camera to use, but I noticed that the Moto E7 Plus captures better portraits of people and pets than objects. It managed good edge detection and you do get the option to set the level of blur before taking a picture.

Low-light camera performance was average and the output looked smoothened. Enabling Night mode changes the output drastically, delivering much brighter and sharper photos. The phone takes about two seconds to capture a shot, and I recommend only using Night mode post sundown.

Selfies taken during the day are good and there is a portrait mode as well which lets you set the level of blur. The phone could not detect faces for selfie portraits with a mask on. Low-light selfies were average in comparison.

Video recording on the Moto E7 Plus is limited to 1080p for the primary as well as the selfie shooter. Footage was good enough for a low-cost phone, but wasn’t stabilised.

After using the Moto E7 Plus for a few days I can say that it is a very good smartphone for the price. The performance it offers is adequate, and should keep many budget phone buyers happy. Its long battery life helps you go on throughout the day without worrying about charging. However, the Micro-USB port is the fly in the ointment here.

Camera performance is good, and while this phone only has two cameras, it delivers in terms of performance. If you want a good all-rounder and a clean user interface, the Moto E7 Plus is the one to go for.