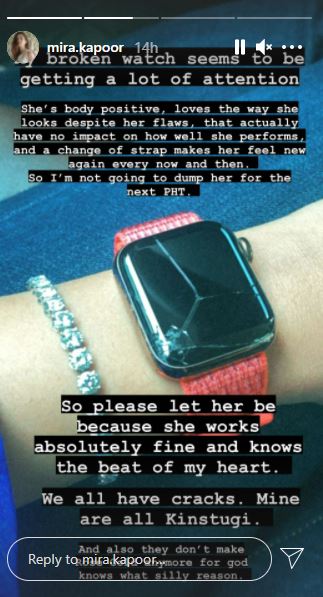 Shahid Kapoor’s wife Mira Rajput has been winning the internet with her thoughtful explanation on why she’s not going to ‘dump’ her cracked smartwatch after netizens pointed out the flaw in her watch and even offered to buy her one.

Penning a long note alongside a close-up photo of her smartwatch tied around her wrist, Mira called her watch ‘body positive’ and wrote that she loves the way it looks despite its flaws. She said that the watch works perfectly fine and knows the beat of her heart. Mira added that her watch feels new with a change of strap every now and then and so, she’s decided not to dump it.

Hopping onto her Instagram Stories, Mira wrote, “My broken watch seems to be getting a lot of attention. She’s body positive, loves the way she looks despite her flaws, that actually have no impact on how well she performs, and a change of strap makes her feel new again every now and then. So I’m not going to dump her for the next PHT.”

“So please let her be because she works absolutely fine and knows the beat of my heart. We all have cracks. Mine are all Kintsugi. And also they don’t make Rose Gold anymore for god knows what silly reason,” she added.

Mira Rajput is an active social media user. With a massive following of 2.7 million on Instagram, Mira has managed to create a fan base for herself. She often shares photos and videos sharing her skincare and fitness routines with her fans and also indulges in branded content.

Recently, she had shared a photo of her parents pointing proudly at one of her posters put up at a mall.

Mira and Shahid tied the knot in 2015 and have two children — a daughter and a son, together.