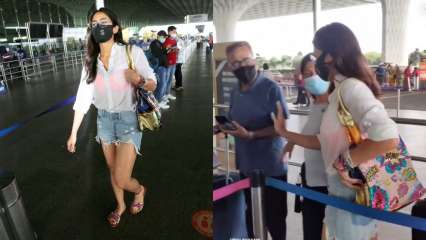 Saif Ali Khan and Amrita Singh’s daughter Sara Ali Khan is one of the most popular actresses in the industry. Sara has fans across the country and is known and loved by all. In such a case, if the actress gets asked “what’s her name”, it is surprising not only for her but also for her fans.

Recently, Sara and her mother were spotted at the airport while leaving the city. Sara was dressed in a neon one sports bra paired with a white sheer shirt and blue shorts. She had a funky bag with stickers on it and was wearing multiple braces on her left hand.

For footwear, Sara kept it casual with mutli-coloured slider sandals. Sara also donned a pair of glasses and a mask with the letter ’S’ bedazzled on it. Meanwhile, Amrita was dressed in a white shirt dress with blue stripes paired with black jeans.

Ditching the VIP gate, the mother-daughter duo decided to go through the normal gate to enter. When Sara surpassed a few people in the line to go to her mother, a fan asked, “What’s your name?” To which the actress smiled and politely replied saying, “Sara.”  She also bid goodbye to the paps.

Fans reacted to the video and took to the comments section to praise Sara. “She is so humble. Very well brought up girl. God bless her,” said one user while another commented, “Most humble actress ever stay this way always.” A third user wrote, “Awwwwwww so sweet,” while a fourth one wrote, “She is so down to earth.”

Netizens even complimented Amrita for instilling good values in Sara. “So nice to see Amrita mam pushing her own luggage and that she inherits to her children’s also,” wrote a user.

Sara is Saif Ali Khan’s daughter with his first wife Amrita Singh. She also has a brother, Ibrahim Ali Khan and shared a good bond with him.

Meanwhile, on the work front, Sara Ali Khan will soon be seen in ‘Atrangi Re’ which also stars Akshay Kumar and Dhanush. Sara also has Vicky Kaushal starrer ‘The Immortal Ashwatthama’ in the pipeline.