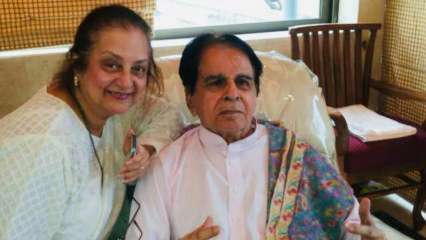 In a tragic piece of news, veteran actor Dilip Kumar, 98, breathed his last on Wednesday. Kumar’s friend Faisal Farooqui took to the actor’s verified Instagram handle to share the news with the legendary actor’s fans.

“With a heavy heart and profound grief, I announce the passing away of our beloved Dilip Saab, few minutes ago. We are from God and to Him we return. – Faisal Farooqui (sic),” read the tweet on Dilip Kumar’s account.

With a heavy heart and profound grief, I announce the passing away of our beloved Dilip Saab, few minutes ago.

We are from God and to Him we return. – Faisal Farooqui

Earlier, Saira Banu on Monday (July 5) gave an update on the health of her husband and legendary actor, Dilip Kumar who was hospitalised last week. Taking to the official Twitter handle of Dilip Kumar, Saira Banu informed fans that his health is improving and requested them to pray for him so that he gets discharged from the hospital.

“We are grateful for God’s infinite mercy on Dilip Sahib that his health is improving. We are still in hospital and request your prayers and duas so that Insha’Allah he is healthy and discharged soon. Saira Banu Khan,” she wrote in her tweet.

On June 30, Dilip Kumar was admitted to the intensive care unit (ICU) of Mumbai’s Hinduja Hospital after he complained of breathing issues. This was his second visit to the medical establishment in the month of June.