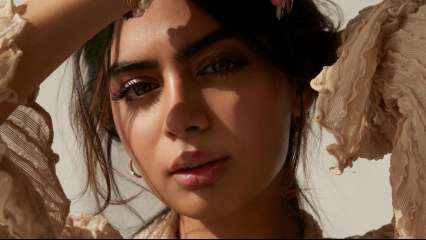 Khushi Kapoor took to Instagram to share two pictures from a new photoshoot of hers. She wore a beige crepe shirt with trousers, a pearl bracelet on her right wrist, hoop earrings and a minimalist gold necklace.

The first image was a close-up shot of Khushi Kapoor, in which she gazed intensely at the camera. In the second, she posed with her face slightly tilted to the side and eyes shut. She captioned her post with a bunch of emojis.

While Khushi limited the comments on her post, she got compliments from many of her friends and family members.

Her elder sister Janhvi Kapoor commented, “Queeeeen can I cry!!!!!!” Her best friend Aaliyah Kashyap wrote, “how are u like this bro,” along with three heart-eyes emojis.

She wore a red crop top with a white border and matching red shorts for a throwback look. Her hair was done with a matching headband, and she completed her appearance with dramatic dewy make-up.

For the unversed, Khushi too is working towards becoming an actor, like her mother and elder sister. She has been pursuing her higher studies in acting in the US at the New York Film Academy (NYFA).