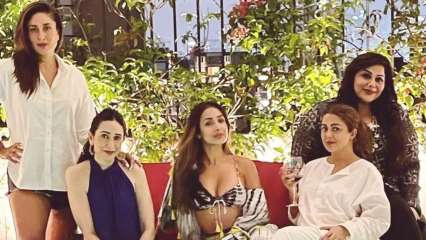 There are few people in Bollywood whose relationships are the epitome of friendship and one such group is Kareena Kapoor, Karisma Kapoor, Malaika Arora, Amrita Arora and makeup artist Mallika Bhat. The girl gang is extremely close to each and takes time out from their busy schedules to chill with each other.

On Saturday, Kareena shared a photo of her girl gang posing on the terrace of her house. The actress looked as stunning as ever in a white shirt and black shorts. Next to her was prim and proper Karisma who wore a blue top and black pants.

The hot and sexy Malaika Arora donned a tie-dye bikini bra paired with pants. She had a matching shirt with it. Amrita Arora twinned with Kareena and opted for a white kurta-pants look for their evening.

While sharing the photo, Kareena wrote, “My forever girls.”

Reacting to the photo, Amrita Arora dropped heart emojis in the comments section. “WOAAAAAHAAA HOTIIIIEEE,” wrote one user while another commented, “THE BEST GANG.”  A third user wrote, “One godess and three queen,” while a fourth one commented, “Looking ravishing hot gorgeous curvy fire on ice love you all.”

Recently, Kareena, her girl gang, and some other big celebrities got together for a dinner party. The part was also graced by Shah Rukh Khan and his wife Gauri Khan, who seldom make appearance at a party. The group was also joined by SII CEO, Adar Poonawalla and his wife Natasha Poonawalla. Other people included Karan Johar and fashion designer Manish Malhotra.

Karisma shared a photo on her Instagram handle which went viral in no time. “A perfect Sunday evening #loveandlaughter,” she captioned her post.

Meanwhile, on the work front, Kareena recently launched her book ‘Pregnancy Bible’ which captures her physical and emotional experiences from both her pregnancies. She is also set to make her debut as a producer with director Hansal Mehta’s yet-to-be-titled thriller. She will also act in the film.