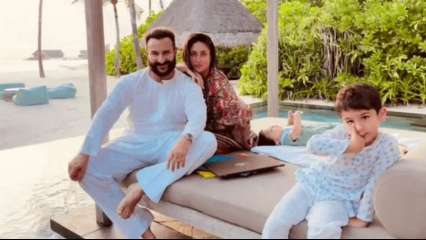 Kareena Kapoor Khan turned writer from actor when she published her book, ‘Kareena Kapoor Khan’s Pregnancy Bible.’ The book describes her pregnancies with sons Taimur and Jehangir Ali Khan, as the title suggests. Kareena discussed a variety of topics in the book, including maternity attire, the significance of a healthy diet, her desires, and her favourite shows to watch while pregnant, among other things.

The reduced sex drive women experience during pregnancy was one of the most talked-about issues in her book. Kareena wrote about how she and her husband, actor Saif Ali Khan, dealt with her sex-drive changing while she was pregnant.

Talking to Guardian, Kareena revealed, “Nobody wants to talk about belching and swollen feet and not feeling sexy enough, or hair loss, or getting such bad mood swings you don’t even feel like talking. That’s why we talk about sex in the book. Most women in India get scared to address this issue. But these are things that we should be talking about.

In an interview with HT Brunch, the actress opens up about her son’s career path and a lot more.

She said, “I want both my sons to be thorough gentlemen, I want people to say they are well-brought-up, kind-hearted and I will think my job is well done,”. “I don’t want them to be movie stars. I’ll be happy if Tim comes and tells me I want to do something else… climb Mount Everest may be… that’s his choice. I want to stand by and support my boys.”

On February 21, 2021, Kareena gave birth to her second son, Jeh Ali Khan. In 2016, she and Saif Ali Khan welcomed their older son Taimur. On the work front, the actress will star alongside Aamir Khan in the film ‘Laal Singh Chaddha’.