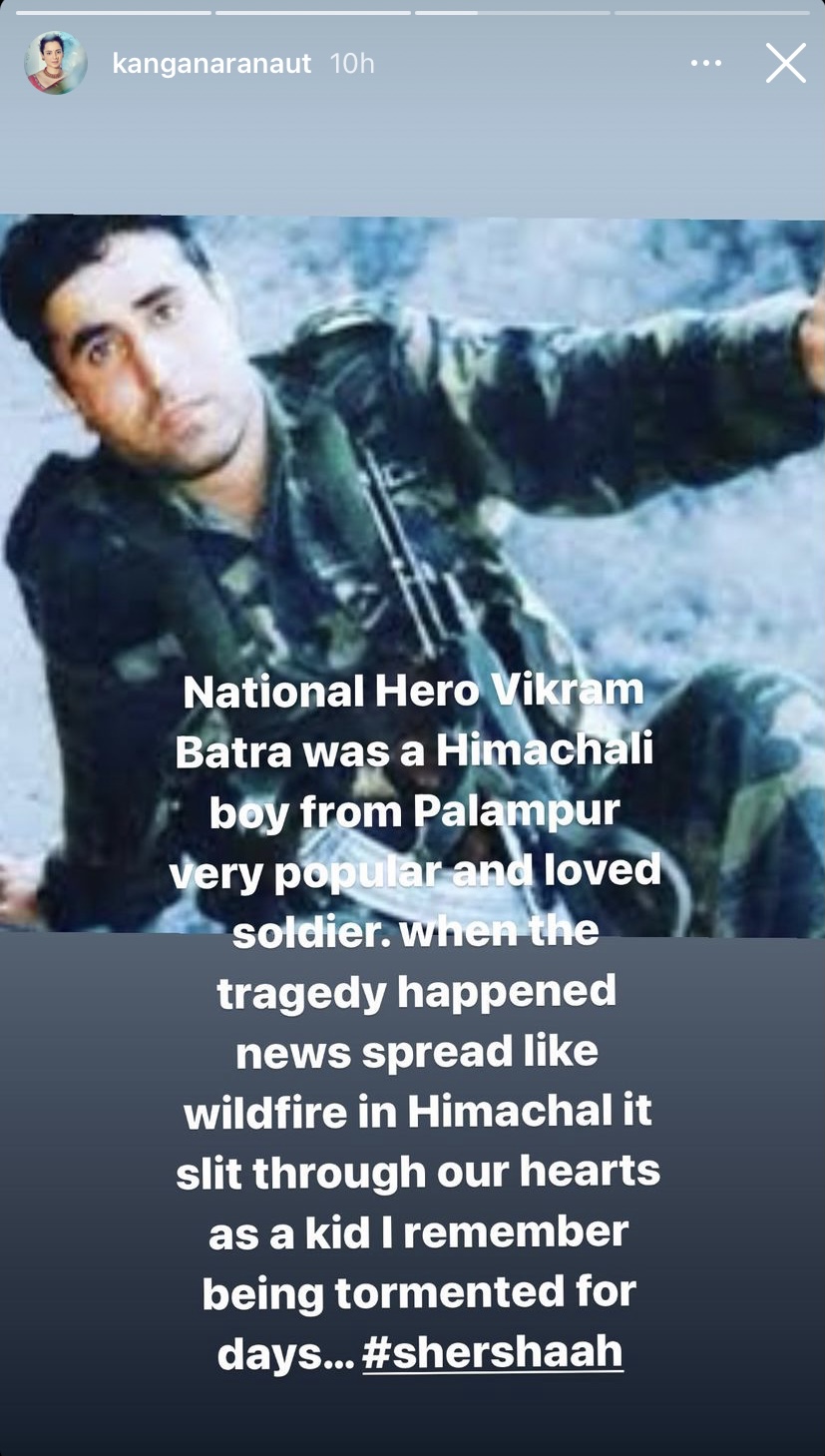 Sidharth Malhotra’s is being immensely praised for his performance in the recently released film ‘Shershaah’. The movie, which revolves around Param Vir Chakra awardee Vikram Batra, who laid down his life in the service of the nation while recapturing Indian territories from Pakistani intruders during the Kargil War in 1999 has not only touched the hearts of viewers but also celebrities like Kangana Ranaut, Alia Bhatt and Mira Kapoor.

Actor Kangana Ranaut is deeply moved by ‘Shershaah’, and took to Instagram on Thursday (August 26) to express her feelings with her fans. Kangana praised the makers of the film for giving tribute to Vikram Batra through their movie. She also recalled how Kargil War made her tormented.

“National Hero Vikram Batra was a Himachali boy from Palampur…very popular and loved soldier. When the tragedy happened…news spread like wildfire in Himachal…it slit through our hearts….as a kid I remember being tormented for days,” she wrote on her Instagram story with a photo of Captain Vikram Batra.

In another story, Kangana also heaped praises on actor Sidharth Malhotra who plays the titular role of Vikram Batra in the movie. While sharing a still of the actor from the film, Kangana wrote, “What a glorious tribute Sidharth… congratulations to entire team, it was a big responsibility and you all excelled, ” she added.

Apart from Kangana, Alia Bhatt also praised Sidharth Malhotra and Kiara Advani for their performance. “Must must must watch! This film has made me laugh and cry and everything more. @sidmalhotra you were too too special yaa! So so moving! And @kiaraaliaadvani my beautiful, you really just shine right through! Congratulations to the whole team and the entire cast. Such a lovely film!!!!!” she wrote.

Shahid Kapoor’s wife, Mira Kapoor was also deeply touched by the film. Taking to Instagram, she wrote, “Loved every bit! Enjoyed a movie after so long.” She continued, “A heartfelt salute to Capt Vikram Batra and all the Bravehearts, one can feel nothing but pride and humility. And here’s to recognising the heroism of Dimple.”