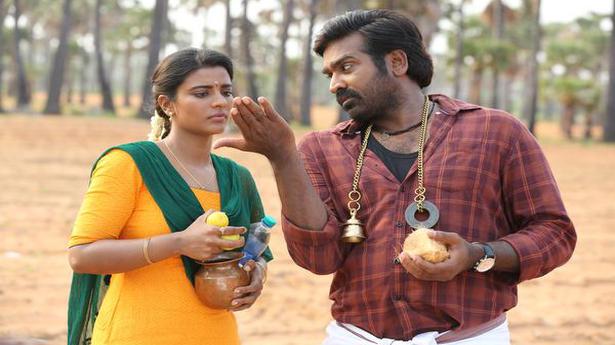 Its rudderless and painfully long narrative aside, the Aishwarya Rajessh-starrer is still a sharp commentary on the shortcomings of a functional democracy

It was an anticipated debut: a Tamil film releasing directly on a newly launched pay-per-view (PPV) platform.

But of course, Ka Pae Ranasingam did not arrive without hiccups. The film is available to view via the PPV service Zee Plex (for customers of DTH platforms), as well as the streaming platform ZEE5. Except it cannot be viewed using the OTT platform’s mobile app, at least not yet.

Viewing Ka Pae Ranasingam via ZEE5 website was an experience, and not of the good kind. Exacerbating the displeasure of a stop-start viewing experience (slow streaming and sudden failure to support Google Chrome as a browser, to name a few) was the film’s runtime: 2 hours and 57 minutes.

It is the kind of time the Stanley Kubricks and Alfred Hitchcocks of the world didn’t need, but for some reason Tamil filmmakers seem to. Perhaps, it was director Virumandi’s way of giving maximum movie for the rental paid (₹199) that the editor’s role was deemed unnecessary.

To put it simply, Ka Pae Ranasingam is painfully long. We are introduced to Ariyanachi (Aishwarya Rajessh) from a village in Ramanathapuram district. She is married to Ranasingam (Vijay Sethupathi), who is working on an off-shore oil plant in Dubai. One day, she gets the news that he is killed, and she is told a false reason for his death.

The future of PPV

A distraught Ariyanachi then recounts her meeting Ranasingam, the water diviner, prior to their marriage. The screenplay adopts a non-linear narrative, and weaves together flashbacks and present-day happenings to give us a picture of Ranasingam — a man who leads from the front the villagers’ years-long fight to secure drinking water from the State.

Gradually, Ranasingam finds that the resistance he strived to build is fading, and so to secure the future of his family, he, too, heads abroad but never returns.

Back to the present day, and we see Ariyanachi made to run from pillar to post to bring back her dead husband: her journey takes her all the way to the Prime Minister of India; the filmmaker builds his screenplay by grabbing incidents that made headlines in the past few years and then turning them into scenes.

Due credit to Virumandi, the debutant filmmaker, for his writing (dialogues) is razor sharp in places.

There is also a touch of simplicity in the manner his scenes are crafted, an appreciable quality since most debut filmmakers fall for the trappings of Tamil cinema and try to go overboard with the drama quotient.

State apathy doesn’t hit you hard — or slap you across the face, if you will — like in a Shankar film. It happens, it is usual and there is nothing you can do to change it. There is no feeling of helplessness or desperation that these scenes leave in you. It doesn’t move you, at all, and that there is how reality sans fiction feels like. Think of the injustice that happened in Hathras days ago, and think of the nationwide outrage that followed… oh no, that was a dream!

Aishwarya Rajessh aces her role as Ariyanachi; hers is not a nuanced performance but it is a character she portrays with effortless ease. Maybe, affording your lead actor more screen time (or close-ups) could have helped.

This is the biggest gripe one is likely to have with Ka Pae Ranasingam. Vijay Sethupathi is, on paper, playing a cameo. But the spectre of Ranasingam looms large on the canvas of a film that should have instead been all about Ariyanachi. It is also a sign of how things work in Tamil cinema.

So long as this industry has more male-sponsored narratives of the female perspective of things, even the so-called ‘female-centric’ films will not permit its female lead to stamp their authority.

A tip of the hat to actor Abhishek, who despite the limited scope of his character (a Government official), was one of only three or four actors in the film who delivers a close-to-believable performance.

Despite its flaws, Ka Pae Ranasingam offers interesting commentary on State apathy. If you can gather enough patience to last its runtime in one sitting, and can also look past the shortcomings of its PPV host, Ka Pae Ranasingam can indeed be some experience.