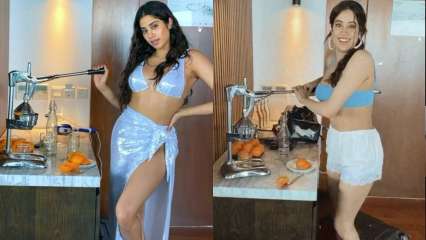 Boney Kapoor and Sridevi’s daughter Janhvi Kapoor might be just three years old in the film industry, but the actor has made a mark for herself and is today counted as one of the top heroines in India. Janhvi is known for her amazing fashion style and her superb dancing skills. Off late, Janhvi has also shown her funny side to fans on social media.

On Friday (August 20), Janhvi shared a hilarious post on her Instagram and fans couldn’t stop laughing. The post included two videos of the actress trying to make orange juice manually from a juicer.

The first video is a boomerang where Janhvi is effortlessly pressing the valve of the juicer. She looks hot in a blue sequin bikini and matching sarong and open hair. The second video in a sports bra and white shorts as she tries to squeeze out the juice with much difficulty. After making a funny face, she says, “Didi itna hi milega aaj,”

Fashion designer Manish Malhotra dropped heart, fire and lovestruck emojis in the comments white Maheep Kapoor commented fire emojis. Fans also reacted to Janhvi’s post and showered her with love and compliments. “Nice looking gorgeous and beautiful,” wrote one user while another commented, “Hot.” A third user wrote, “Mast malang,” while a fourth one commented, “You are so relatable.”

Earlier this week, Janhvi Kapoor was spotted at her cousin, Rhea Kapoor and Karan Boolani’s wedding reception party. Janhvi was dressed in blue shimmery paired with white pants and tied up hair. Rhea and Karan tied the knot at Anil Kapoor’s plush Juhu mansion on August 14 in the presence of close friends and family including Sonam Kapoor, Arjun Kapoor, Sanjay Kapoor, Harsh Varrdhan Kapoor, Shanya Kapoor, Khushi Kapoor and Masaba Gupta among others.

Janhvi was last seen in ‘Roohi’ earlier this year. She will soon wrap up filming for her father Boney Kapoor’s upcoming feature ‘Helen,’ which is set to begin production later this month. She’s also working on a sequel of ‘Dostana,’ though no date has been established for its release. Apart from that Janvhi also has Good Luck Jerry and Dostana 2.