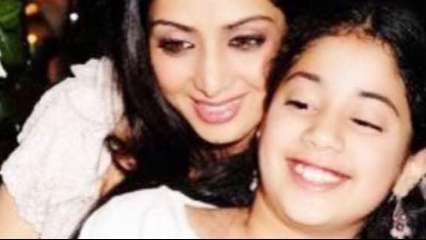 Sridevi’s tragic demise shook everyone to the core. Not just her family but fans too mourned her death. Today is the legendary actor’s birth anniversary.

Taking to her Instagram, Sridevi’s daughter and actress Janhvi Kapoor has posted a throwback photo with her.

Sharing the photo, she wrote, “Happy birthday Mumma. I miss you. Everything is for you, always, every day. I love you.”

Janhvi recently celebrate a year of ‘Gunjan Saxena: The Kargil Girl’. In a post, she wrote, “Nothing I ever say will do enough justice to what this journey has meant to me. I could have never even dreamt of a creative process that felt so pure and enriching, in every way. And I`m so grateful for all the people that helped make it that way, and most of all to Gunjan Mam for letting us be privy to her spirit and her rare sincerity, something that continues to guide me and shape my outlook in everything I try to do,” she wrote.

“And Sharry, for recognising and making us all feel the importance of what this story stood for. You made trusting the process feel more fruitful than daunting, and that was more valuable than any reward we as a team could have asked for #GunjanSaxena,” Janhvi added.

For the unversed, Sridevi was in Dubai with her husband Boney Kapoor, daughters Janhvi and Khushi Kapoor, and nephew Mohit Marwah to attend his wedding. According to reports, the 54-year-old actress died as a result of unintentional drowning.

Janhvi’s other projects include finishing filming for her father Boney Kapoor’s film ‘Helen,’ which is set to begin production this month. She’s also working on a sequel to ‘Dostana,’ although the release date has yet to be announced.