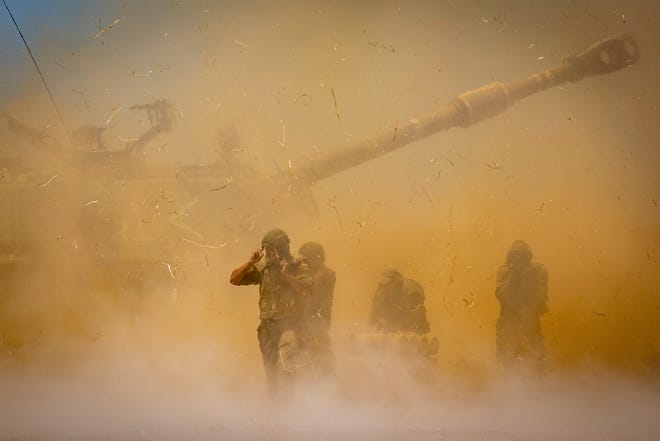 WASHINGTON – A top Israeli military spokesman said Sunday he had made a “small mistake” earlier this week when he told foreign reporters that Israeli troops had begun a ground invasion into Gaza.

But the Israeli spokesman, Lt. Col. Jonathan Conricus, denied it was part of a ruse to lure Hamas fighters into positions where they would be more vulnerable to attacks by Israel Defense Forces.

“There were troops on the ground very, very close to the border, and I had information that they had gone in,” when in fact they had not, Conricus said in an interview with USA TODAY.

He said his mistake amounted to the “difference of a few meters on the ground.” It was an “unfortunate small mistake that became very important because it was in an important time,” he said.

Based on his information, a spate of major U.S.-based news organizations, including the New York Times and the Wall Street Journal, reported that Israel had begun a ground invasion. Several Israeli media outlets later reported the incorrect information was part of a “ploy” to make Hamas, the militant Islamic group that controls Gaza, believe a ground invasion was underway.

“Now it turns out that this is not a mistake, but a planned ploy whose role is to help eliminate Hamas’ forces,” an Israeli TV channel reported later Friday. “The IDF made Hamas think that a ground operation was beginning, which caused the organization to bring in all its fighters … into the tunnels and prepare for combat.”

Conricus said Israeli troops were in fact trying to deceive Hamas, so its fighters would go into its vast network of underground tunnels.

“We tried to achieved that by having ground troops mass and start to maneuver along the border,” he said. “But my actions were not related to that.”

Conricus also defended Israel’s decision to strike an office building in Gaza that housed The Associated Press and Al-Jazeera.

“This was a legitimate military target,” he said. He said Hamas was using the building for its military intelligence headquarters, for research and development and to store some “advanced technological equipment.”

In a statement on Saturday, the AP’s president and CEO, Gary Pruitt, said he was “shocked and horrified” by the attack and called on the Israeli government to provide evidence the building had been used by Hamas.

“We have had no indication Hamas was in the building or active in the building. This is something we actively check to the best of our ability,” he said.

Pruitt called the strike “incredibly disturbing,” adding “the world will know less about what is happening in Gaza because of what transpired today.”

Joel Simon, executive director of the Committee to Protect Journalists, said the attack raised concerns that Israel was targeting the media “to disrupt coverage of the human suffering in Gaza.” He demanded “detailed and documented justification” for the attack.

Conricus suggested the AP had not done “due diligence” in investigating the other tenants in the building.

“In Gaza, in an area controlled by a terrorist organization, that we think is kind of a requirement – to do due diligence and to check who are the other organizations and entities that are sharing the same building,” he said. “They didn’t look or investigate or ask questions about it.”

He said Hamas likely chose the site because it was also home to news organizations and “believed journalists would be their human shields.”

Israeli Prime Minister Benjamin Netanyahu said on Sunday the offensive was not drawing to a close.

“We’re trying to degrade Hamas’s terrorist abilities and to degrade their will to do this again,” he said in an interview with CBS’s Face the Nation. “It’ll take some time. I hope it won’t take long, but it’s not immediate.”

The Israel-Gaza conflict began amid a bid by Jewish settlers to evict Palestinian families from their homes in East Jerusalem. Now in its seventh day, the conflict has broadened into a deadly military confrontation between Hamas, which has launched rockets at targets in Israel, and Israel, which has responded with a barrage of missile strikes.

“We have 2,900 rockets that have been fired so far, in a matter of seven days, at our civilians,” Conricus said.

On Sunday, Israeli airstrikes flattened three buildings in Gaza City and killed at least 37 people, according to the AP.

The violence, which came as international mediators worked to broker a cease-fire and stave off an Israeli ground invasion of the territory, marked the worst fighting here since the devastating 2014 war in Gaza.