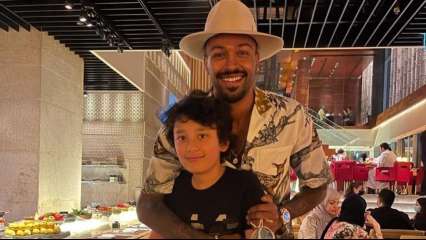 Shahraan Dutt, son of actor Sanjay Dutt, posted a photo from his Dubai journals on Instagram, starring cricketer Hardik Pandya. Shahraan, who has a leg injury, grinned for the camera while on crutches. Hardik stood behind him, his arm around his shoulder.

Hardik donned a printed half-sleeved shirt, black pants, and a hat, while Shahraan wore a black T-shirt with khaki-colored pants.

Take a look at some more posts by Shahraan-

He posted on Raksha Bandhan and captioned the post as “I will always protect you my beautiful sister. love you”

For the unversed, Sanjay and Maanayata married in 2008, and Shahraan and Iqra were born in 2010. Sanjay’s daughter Trishala is the result of his first marriage to the late Richa Sharma.

Sanjay was recently seen in ‘Bhuj: The Pride of India’, opposite Ajay Devgn, Sonakshi Sinha, Nora Fatehi, and Sharad Kelkar. Critics were mainly critical in their assessments of the picture. ‘Shamshera’, ‘KGF Chapter 2’ and ‘Prithviraj’ are some of his forthcoming ventures.