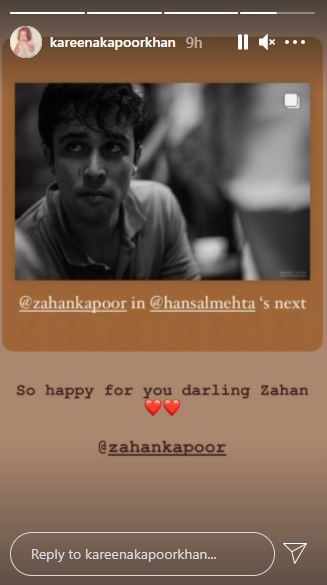 Reportedly ‘based on a true incident’,  the film is backed by Anubhav Sinha and Bhushan Kumar.

Zahan is the son of late Shashi Kapoor’s eldest son Kunal Kapoor and Sheena, daughter of Ramesh Sippy. His parents are separated.

As per reports, Anubhav Sinha who is known for critically acclaimed films like ‘Article 15’, ‘Mulk’ and ‘Thappad’ along with Hansal Mehta who has delivered some phenomenal films like ‘Omerta’, ‘Shahid’, ‘Aligarh’ among other, have handpicked Zahan Kapoor and Aditya Rawal for their untitled project and groomed them with gruelling sessions that went on for months for their characters.

“Hansal and I wanted to cast new actors in this human story as we want the audience to feel they are watching characters rather than any star in the film with preconceived notions. We’ve already started shooting for the film and the hard work these two are putting in is commendable,” Anubhav Sinha said in a statement.

“Both Zahan and Aditya have been selected on the basis of their talent and potential. The characters they play are very intricate and I’m sure the audience will love them too,” Hansal Mehta said.

The first looks of Zahan and Aditya were dropped by Hansal on Instagram on Monday which went viral in minutes.

Kareena Kapoor Khan took to her Instagram Stories to express her happiness on seeing cousin Zahan’s first look from his debut film.

‘White man poking fun at our desperation’: Hansal Mehta hits out at netizen who mocked typo in his request for vaccines