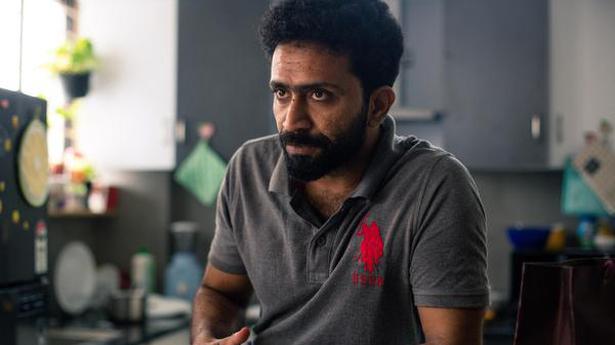 With ‘Love’ set to hit the screens, actor Shine Tom Chacko gets talking about his films, his appearance and why it is important to keep going

As Alwin in 2019 Malayalam film Ishq, Shine Tom Chacko made everybody’s skin crawl. He was so creepy that he gave the emotion a whole new dimension. A year later, Shine says he is glad he did it.

“There was no question of refusing something like that. To get full screen time — two-and-a-half hours — to disgust the hell out of viewers… that would be any actor’s dream,” he laughs.

Alwin was one of the most despicable villainous roles in Malayalam cinema in recent times and Shine knows it was a one of his finest acts in his decade-long career. But he is not ready to give himself the credit just yet. “One never really feels completely satisfied with one’s performance. There is always room for improvement; there’s always room to grow.”

He is awaiting the release of Khalid Rahman’s Love, a thriller. Shot during the COVID-19 pandemic, inside an apartment, the film is an example of how one gets the most out of a bizarre situation such as this, says Shine. “We started shooting in June soon after restrictions were lifted and wrapped up in about 24 days. It was intense as all of us were confined in a congested space. We would start shooting at about 7.15 am and stop only at about 10.30 pm. But it was a revelation for us that a film could be shot within so many constraints,” he says.

Love is looking for an OTT and satellite release. “If we get a theatre release, then that too.”

The period has been especially stressful for the film industry, with a number of projects suspended midway. “A lot of us are wondering when we would get back to ‘normal’ again.This is the time to be productive and perfect our craft.”

Shine began acting in 2010, after working on a few projects as an assistant director. Though acting was his end goal, he could not muster up the courage to ask the director he had gone to meet years ago to ask for a chance.

“I saw the film crew and suddenly it dawned on me that I didn’t have the looks to become an actor. I quickly said I wanted to assist in direction.” And that, he says, was the beginning of a tough, yet rewarding journey in cinema. “It took me years to understand that my looks were my strength … my identity.”

His unconventional looks might make him an unlikely lead, but right from his debut in Gaddamma (2010) to the most recent Maniyarayile Ashokan, Shine ensured he was taken note of. He built an identity for himself. Many of the characters he has done, in the 50 odd films he has acted in, have jagged edges. The exception was 2014 romantic comedy Ithihasa, which was based on a series of events that ensue after two people’s bodies were swapped, when Shine had the audience in splits.

In 2015, just when he was on the brink of fame and success, Shine got embroiled in a narcotics case. Shine was vocal about the incident since, giving television interviews and meeting the press. He began gathering his life piece by piece. He was not so sure of making it back, but he wasn’t going back without a fight, he had told MetroPlus at that time.

Today, Shine is known for his craft. “What I am as an actor today is a sum total of what I have watched. I have grown up watching the Malayalam films of the 80s and 90s and everything I have done on screen, I got from there,” he says the actor, who has Aaravam, Djinn, Veyil, Velleppam, Padavettu, Roy and Kurup lined up.

He has a number of releases lined up — Aaravam, Djinn, Veyil, Velleppam, Padavettu, Roy — and the one he is particularly excited about — Srinath Rajendran’s crime thriller Kurup, based on “Kerala’s most wanted criminal” Sukumara Kurup.

Shine plays Kurup’s (played by Dulquer Salman’s) brother-in-law Bhaskara Pillai. “Bhaskara Pillai was quite an experience…. He is the kind of guy who is totally unpredictable. He is drunk all the time and does his own thing. I had complete freedom to do Bhaskara Pillai. Srinath gave me the space and just asked me to perform,” he says.

Shine will play a cop in Ajay Devaloka’s Aaram Thirukalpana, starring Nithya Menen, slated to go on the floors in 2021.