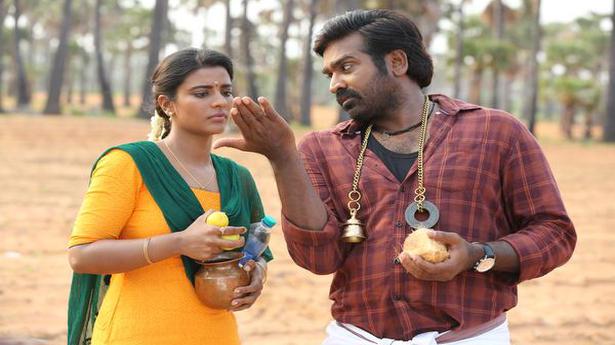 While filming Ka Pae Ranasingam in the hinterlands of Ramanathapuram district, Aishwarya Rajessh witnessed first hand the cultural impact of drought on the local community.

“Water scarcity is something we have all faced at some point of time in our lives. But what I saw in Ramanathapuram was different. I learnt that newly wed couples are gifted wheelbarrows by their family members. It is so that men and women can transport at least four or five pots of water at a time,” the actor says, in a Zoom interaction ahead of the October 2 release of the aforementioned film.

Ka Pae Ranasingam, the film which she stars in alongside Vijay Sethupathi, is set for an international premiere on Zee Plex, a pay-per-view service offered by ZEEL.

The film’s director, P Virumandi, who was also present during the interaction, says this of the titular character: “Ranasingam was a real life personality who fought for water rights of villagers, several years ago in rural Madurai. When I was researching for the film, I discovered that these communities still named their children after him.”

While the story was initially developed for a cast led by Aishwarya Rajessh, the inclusion of Vijay Sethupathi happened at a later stage.

Aishwarya reveals that it was she who convinced Virumandi to offer the role of Ranasingam to Sethupathi. “The producer and crew had apprehensions because they thought there was no chance that a star like Vijay Sethupathi would agree to come on board the film,” she says.

“When the director told him the story, he suggested several changes. We incorporated those changes and then he came on board. Initially, the film was planned to be shot at a lower budget, but once he entered, the costs went up and many things changed about the film’s canvas. Sethu is a big support for this film,” Aishwarya adds.

Sethupathi was initially expected to do a guest role in the film. But changes to the script meant that the actor will now be seen in an extended cameo role with a screentime of 40-45 minutes.

Asked to justify why the film was titled as Ka Pae Ranasingam (which translated from Tamil reads: Name of husband: Ranasingam), Virumandi insists that the film revolves around Aishwarya’s character Ariyanachi. “The story is about how Ariyanachi evolves and carries forward Ranasingam’s life’s work for the community,” he adds.

The crew shot the film in Ramanathapuram for 45-50 days. Says Aishwarya, of what pushed her to do the film, “I listen to a lot of female-centric storylines. But a lot of these stories deal with child abuse, sexual harassment and rape. It becomes clichéd after a point of time. But Ka Pae… is different. It is a story that needs to be told,” she says, adding, “We (women) need stories where we can experiment and perform.”

The film’s release on a pay-per-view platform like Zee Plex has kicked up interest in Tamil film circles.

Though Aishwarya indicates that she wished for a theatrical release, uncertainty due to COVID-19 may have pushed the producer, KJR Studios, to release the film now. When asked of the impact of going ahead with a pay-per-view premiere, she adds: “I’m equally in the dark about how the economics of a pay-per-view release will work out. It is a question for the producer.”