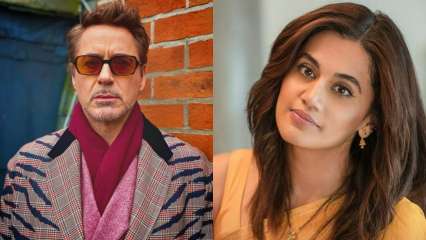 Bollywood actor Taapsee Pannu has been receiving mixed reviews for her performance in ‘Haseen Dillruba’ which released on Netflix on July 2. The B-town diva who never minces her words recently made a candid confession that has left the internet amused.

In a video clip shot by the streaming platform for the promotion of the film, Taapsee and Vikrant Massey (Taapsee’s husband in the film), are seen taking a lie detector test and asking each other some questions, expecting an honest reply in return.

During the interaction, when Vikrant asks Taapsee if she ever slid into a person’s DM who she does not follow, the actress replied in the affirmative and then revealed it was ‘Iron Man’ Robert Downey Jr’s DM that she had slid into.

Taapsee can be heard saying, “So, I DM’d Robert Downey Jr and no one replied. I was like, I have more followers than you also,” she said.

Presented by Matinee Entertainment, the forthcoming movie is written and directed by Swaroop RSJ. Announcing the news, the production banner took to its official Twitter handle and wrote, “This ‘Mishan’ is surely ‘Impossible’ without her. Welcoming the amazingly talented @taapsee on board for #MishanImpossible.”

The makers have also unveiled the movie’s poster, where Taapsee is intensely looking at a laptop screen.

Niranjan Reddy and Anvesh Reddy are the producers of ‘Mishan Impossible’.

For the unversed, Taapsee started her acting journey with Telugu cinema only. ‘Jhummandi Naadam’ was her first film ever.

On the Bollywood front, Taapsee will be next seen in ‘Rashmi Rocket’, ‘Loop Lapeta’ and ‘Shabaash Mithu’.

Taapsee Pannu’s sister Shagun has ‘seen a lot of locations’ for actor’s wedding, says ‘recce has been done’

Taapsee Pannu rings in birthday on sets of ‘Blurr’, shares breathtaking photo with note ‘last week has been tough…’