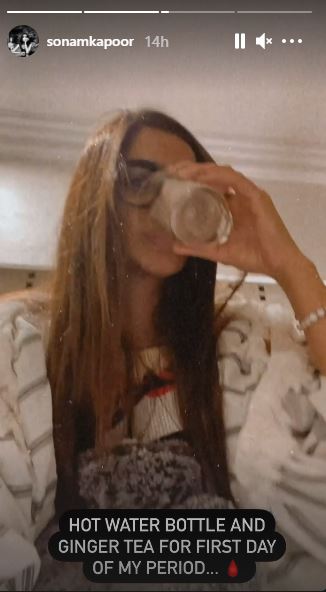 Just a few weeks after netizens speculated that Sonam Kapoor might be pregnant, the actress has now shared a video from her workout session where she can be seen flaunting her toned figure.

In the video shared on her Instagram story, Sonam is dressed in grey leggings paired with a matching sports bra and t-shirt. She is holding her t-shirt over her chest to show her toned midriff and hips. The actress also had a sexy golden coloured belly chain on her waist.

Check out the photos here:

Reacting to the photo, fans showered Sonam with love and compliments. “So hot,” wrote one user while another commented, “Hottier than ever.” Some users even said that the photos confirm that Sonam is not preggers. “Means she is nt pregnent,” wrote the user.

Last month, Sonam had returned to India and photos and videos of the diva breaking into tears upon seeing her father, senior actor Anil Kapoor at the airport went viral on the internet. Soon after her arrival, fans started speculating that the ‘Neerja’ star was pregnant, pointing out the outfit she was wearing — a blazer teamed with a free-flowing skirt, to hide her pregnancy.

Sonam Kapoor returned to India after nearly a year. She had flown to London when lockdown norms were relaxed in the country last year, to be with her husband Anand Ahuja. Earlier this month, Sonam’s sister Rhea Kapoor tied the knot with her longtime beau Karan Boolani at Anil Kapoor’s plush Juhu mansion.

While in London, Sonam had started working for her next movie and wrapped the shoot of ‘Blind’, a thriller directed by Shome Makhija. The film is produced by Sujoy Ghosh.

Rhea Kapoor shares FIRST photo from her intimate wedding with Karan Boolani, reveals she ‘cried all the way through’

Sonam Kapoor-Anand Ahuja pose for paparazzo as they arrive for Rhea Kapoor-Karan Boolani’s wedding, photos inside

Rhea Kapoor to tie the knot with longtime beau Karan Boolani? Details inside