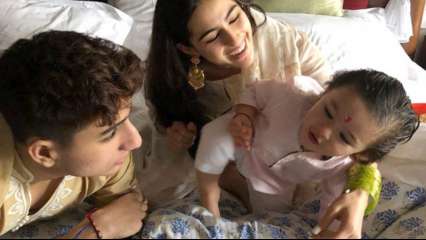 Despite the fact that Sara Ali Khan’s father married diva Kareena Kapoor, Sara and the couple’s kids have a close relationship. She frequently posts images of herself with Taimur and has spoken about him and Jeh in interviews.On an episode of Feet Up With The Stars Season 3, Sara revealed, that Taimur once called her ‘gol’ (round). She said, “He called me gol once and it became like funny but he didn’t call me gol he was just saying gol in general. I don’t think he is body-shaming me, which has been conducted as a meaning.

In an episode of the same show, she also talked about her parent’s separation. She said,” It’s very simple. If you see there are two options. Either live in the same house where no one is happy or live separately, where everyone is happy with their own lives, and you also get a different kind of love and warmth every time you meet.”

I have a father too who is always available on the phone, and I can meet him whenever I want. I don’t think they were happy together ultimately, so I guess to separate was the best decision to make at the time,”

“All of us are much happier than we would have been for sure. So, everything happens for a reason,”

Sara is currently anticipating the release of ‘Atrangi Re,’ a film starring Akshay Kumar and Dhanush. The film, directed by Aanand L Rai, was completed in March of this year. Sara will also appear in Aditya Dhar’s upcoming film, ‘The Immortal Ashwatthama’, starring Vicky Kaushal.