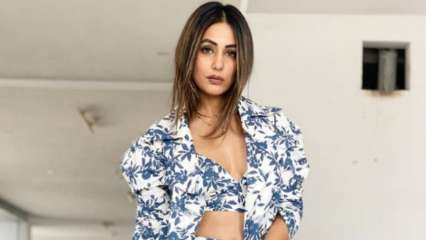 Hina Khan is undoubtedly one of the most successful TV actors in today’s time. She made a mark for herself in the industry by essaying the role of Akshara in the hit show ‘Yeh Rishta Kya Kehlata Hai’. She rose to fame with the show and went on to do it for several years before quitting it. But did you know that Hina once auditioned for ‘Indian Idol’?

Yes! Before her big break as Akshara, Hina Khan had auditioned for ‘Indian Idol 4’ in 2008. The actor had made the revelation when she was a part of the ‘Bigg Boss 14’ house. Hina revealed that she was successful in bagging a place in the top 30 during the Delhi Elections, however, she did not make it through after that. Soon after Hina got selected for Yeh Rishta Kya Kehlata Hai.

Not only this, Hina also shared that some of her friends and she had gone to audition for a singing contest in a mall where Rahul Vaidya was present as the special guest in the show. Recalling the incident, Hina said that Rahul even selected her as the winner.

It is no secret that the stunning actor has a melodious voice. She has showcased her singing talent on various platforms including ‘Bigg Boss’. Hina has also participated in

After her stint in ‘Bigg Boss 11’, Hina went on to work in several music videos such as Sonu Thukral’s ‘Bhasoodi’ and Tanmay Ssingh’s ‘Patthar Wargi’. Hina is currently enjoying the success of her music video ‘Baarish Ban Jana’ which also stars Shaheer Sheikh.