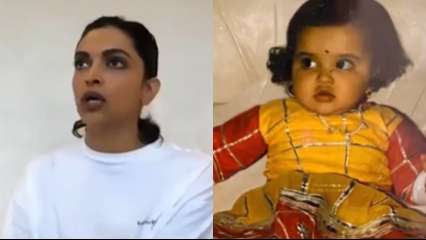 She recently uploaded a reel in which she discusses her childhood. The frame fades to some of her childhood images as she finishes speaking.

Fans took to the comment section and showered her with love. One wrote ‘so cute deepika’ followed by a red heart emoji. Another one wrote’ hloo beautiful mam’. ‘Aww you are so beautiful’ wrote a third. Other dropped heart and fire in appreciation of the actress.

Deepika Padukone began filming Nag Ashwin’s next film, Project-K, in Hyderabad a few days back. She gets a leading role alongside Prabhas in the film, which also features Amitabh Bachchan.

She shared a picture of the clapboard on Instagram and wrote, “It’s Day 1 at Project-K & I’m absolutely thrilled for what’s coming ahead… #Day1 #ProjectK @nag_ashwin @actorprabhas @amitabhbachchan @vyjayanthimovies.”

On the work front, Deepika has a number of films in the works, including Kabir Khan’s ’83,’ in which she will star alongside Ranveer Singh; Shakun Batra’s next, in which she will star alongside Siddhant Chaturvedi and Ananya Panday; ‘Pathan’, in which Shah Rukh Khan will make his acting comeback; ‘Fighter,’ in which she will play Draupadi; and a cinematic adaptation of the Mahabharata, The film, which was announced on Hrithik’s birthday this year, would be directed by Sidharth Anand. It will be India’s first aerial action film franchise. The film ‘Fighter’ will be released on a large scale for a worldwide audience on September 30, 2022. She’ll also be seen in Amitabh Bachchan’s Hindi adaptation of ‘The Intern’.