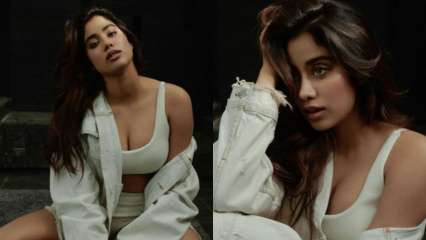 Actress Janhvi Kapoor flaunted her bold and beautiful side in the latest photos she shared on social media on Monday. Janhvi posted two pictures on Instagram. In the image, she is seen flaunting her assets in a white, deep-necked sports bra, paired with shorts and an oversized white denim jacket. She looks every inch gorgeous as she poses for the camera. For the caption, she chose to put a white heart emoji.

As soon as Janhvi shared the photos, fans took to the comments section to shower love and praise. “Damn!” wrote an Instagram user, while another commented, “Wow mam so gorg.” “Uffff no words yrrr,” commented yet another user. Fans also praised Janhvi for her flawless beauty by describing her as ‘fabulous’, ‘hot’, ‘glamorous’ and also dropped fire emojis

We are aware that Arjun and Janhvi shot with each other last evening in Mumbai. Photographer Rohan Shreshta was also on set for this special project. “It isn’t for a film but it’s a secret project that will go viral whenever it releases. Arjun and Janhvi haven’t done a film together and it is certain that they aren’t collaborating on a film just yet. This will be a shoot that will be highly memorable because it brings Arjun and Janhvi together for the first time. We have to patiently wait to see it,” a source had said.

Meanwhile, Janhvi is gearing up for the release of her film ‘Dostana 2’. ‘Dostana 2’ recently made headlines as the production banner Dharma Productions announced actor Kartik Aaryan’s exit from the film.

The actress finished the shoot for her film ‘Good Luck Jerry’ earlier this year. She had taken to Instagram to share this news with her fans.