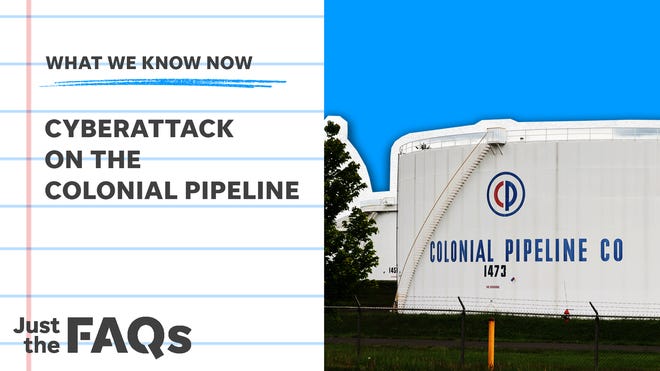 The shutdown of the Colonial Pipeline is sending thousands to fill up their tanks at gas stations. Gas prices are above $3, and some stations are running out or low on fuel. The Colonial Pipeline stretches from Texas to New Jersey and supplies almost half of the East Coast’s fuel.

The pipeline was shut down after a cyberattack, but the fuel company “initiated the restart of pipeline operations”  at 5 p.m. ET on Wednesday. By Thursday morning, the Colonial Pipeline Co. said they made “substantial progress” and the delivery of gas had begun to the majority of markets they serve.

However, the company added “it will take several days for the product delivery supply chain to return to normal” and fully replenish supplies.

on Wednesday, Colonial Pipeline said it hoped to “substantially” restore service by the end of the week.

How long will it take to re-supply the gas stations?

Gas stations are expected to receive product from the Colonial Pipeline by mid-day today. The system was restarted yesterday and Energy Secretary Jennifer Granholm tweeted things should return to normal by the end of the weekend.

Which states are affected?

Georgia, South Carolina, North Carolina and Virginia may be more heavily affected because they have limited options in terms of fuel transportation alternatives.

The Colonial Pipeline system delivers about 45% of the fuel for the East Coast, including gasoline and jet fuel. Gulf Coast states can rely more easily on shipments from tankers.

The FBI said an online gang known as DarkSide struck the Colonial Pipeline system with a ransomware attack, which takes computerized systems hostage until a payment is made.

“We continue to work with the company and our government partners on the investigation,” the FBI said.

Further details on the hack haven’t been released.

Did they pay the ransom?

“Once they received the payment, the hackers provided the operator with a decrypting tool to restore its disabled computer network,” Bloomberg reported. “The tool was so slow that the company continued using its own backups to help restore the system, one of the people familiar with the company’s efforts said.”

Could another hack or shutdown happen?

Yes, another shutdown or cyberattack is possible.

GasBuddy analyst Patrick de Haan said this attack leaves the industry “vulnerable” to others. Oil Price Information Service analyst Tom Kloza said it’s a “wake-up call” for the energy industry. “Imagine if it was one of the power companies,” he said.

The Colonial Pipeline restarted at 5 p.m. ET on Wednesday, according to Colonial’s website. They expect for gas to reach each market they serve by mid-day Thursday.

To help the supply chain, affected states are allowed to use interstate highways to transport overweight loads of gasoline and other fuels, under disaster declarations.

Should I stock up on gas?

Jeff Lenard, vice president of strategic industry initiatives at the National Association of Convenience Stores, said Americans should purchase their gas as they would on any other “normal” day.

“This is the worst panic buying for gasoline since the Carter administration,” Kloza said.

He said outages at more than 10,000 gas stations are spreading “like a bad rash” on the East Coast.

How can I safely store gas?

The U.S. Consumer Product Safety Commission issued a warning to not fill plastic bags with gasoline.

“We know this sounds simple, but when people get desperate, they stop thinking clearly. They take risks that can have deadly consequences. If you know someone who is thinking about bringing a container not meant for fuel to get gas, please let them know it’s dangerous,” the USCPSC tweeted.

Is it safe to take a road trip?

Rob Underwood, president of Energy Marketers of America, said not to panic when scheduling vacations. As long as panic buying subsides, Underwood predicted, the supply chain – and gas prices – would stabilize.

“With the end of panic buying, we can all go about our regular schedules and plans. Once your tank is full, you can’t get any fuller or safe than that in your tank,” Lenard said.

Lenard said Memorial Day weekend is three weeks away, and the pipeline should be up and running before then.

Why aren’t gas stations limiting how much people can buy?

Rationing of gas quantities was last seen in 2012 after Superstorm Sandy. Lenard said rationing is usually implemented after a prolonged period of shortages, which isn’t the current case.

“There’s a lot of tension at the gas stations now; it’s even a struggle to regulate masks at stations. So rationing isn’t under consideration right now,” Lenard said. “People just need to use common sense, it’s not the time to buy gas in bulk.”

Is there a gas shortage or overreaction?

Susan Grissom, chief industry analyst at American Fuel and Petrochemical Manufacturers, and Lenard said there is not a gas shortage but a disruption in the supply chain. Grissom said that although there is an abundance of fuel, there are challenges in how to deliver it across the East Coast amid the Colonial Pipeline’s disruption.

“It takes time to regroup massive quantities of product and efficiently make deliveries to more remote areas that are supplied by the Colonial; figuring out the time and logistics takes some time,” Grissom said.

Where can I find gas?

The GasBuddy app features a fuel availability tracker that tells users which stations have no gas, no fuel or no power.  The tracker is crowdsourced, and motorists are encouraged to report stations out of gas or fuel. On Wednesday, the app experienced a temporary shutdown of its own.

“We will keep checking in the background and, as soon as the site comes back, you will automatically be served the live version,” read a message on the site.

The message was removed Wednesday afternoon.