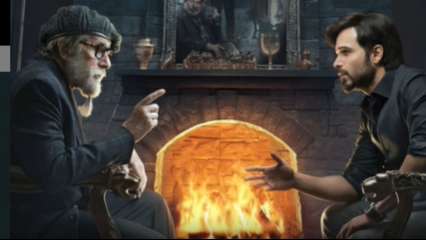 ‘Chehre’ had been the buzz of the town ever since it was announced. Whether it’s because of the famous cast or the release date, this film has been attracting a lot of attention. The Emraan Hashmi and Amitabh Bachchan starrer’s release date was previously set, but it was later pushed. However, the official release date has now arrived.

On August 27, the film directed by Rumy Jafry will be released in theatres.

Amitabh Bachchan shared a little snippet from the film in which he appears. Sharing the video, he wrote, “CAUTION You have been warned! Be ready to #FaceTheGame, kyunki yeh ilzaam aap par bhi lag sakta hai. #Chehre, releasing on 27th August in cinemas near you.”

Emraan too posted the same video writing the same thing.

The teaser for ‘Chehre indicated that Amitabh Bachchan will play a lawyer and Emraan Hashmi will portray a business executive. They stage a pretend trial in the trailer, and Bachchan puts Hashmi on the stand. What begins as a game quickly transforms into a terrifying experience for Hashmi’s character.

Speaking about the film`s theatrical release, producer Anand Pandit said, “The team had taken great efforts and we always thought that Chehre deserved a theatrical release. We want the magnanimity of the film to be showcased in the right way and hence are excited to finally reach the audience through the cinema screens.”

Director Rumy Jafry shared, “We are excited that our film is getting a theatrical release because the way it is shot and the efforts we have taken in terms of the production and post-production can only be experienced in the cinema halls. Also, I assure the audience that it will be beyond satisfaction to watch Amitabh Ji and Emraan together on the big screen for the first time.”

(With Inputs from IANS)