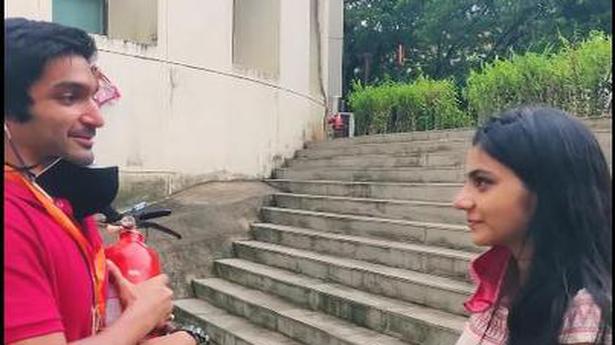 Computer screen films, which are considered an offshoot of the found-footage genre, have been gaining popularity for over a decade now — Leo Gabriadze’s Unfriended (2014) and Aneesh Chaganty’s Searching (2018) received critical acclaim and financial success. The stories in these films take place on digital screens rather than the real world.

This experimental subgenre has become a necessary storytelling device during the pandemic. We saw Mahesh Narayanan employ it effectively in CU Soon, starring Fahadh Faasil, which released on Amazon Prime earlier this month.

Pranav Bhasin’s (creator of TVF’s The Insiders) mini-series Cabin Fever, released on music producer Ritviz’s YouTube channel, unfolds through phone screens for the most part. But unlike the aforementioned films, which are either thriller or horror, Pranav’s three-episode series, co-produced by Ritviz and Jugaad Motion Pictures, is a romantic comedy. It’s about the lockdown lives of an urban middle-class couple, Sanskriti (played by Sanskriti Shukla) and her man-child boyfriend Jounty (Arnav Bhasin — Pranav’s younger brother), which we get to witness through their video calls.

Pranav, however, de-emphasises the phone-screen format. It wasn’t a gimmickry to hard-sell his story; it was the only available narrative device during the pandemic. “I would have preferred to tell the story in a more cinematic form [with more cameras, better lighting and other things]. The story matters more than the format.” He’s right. After the first few minutes, you get used to the medium of the protagonists’ conversation; the attention is more on the conversation itself. It’s easy to relate to their individual and interpersonal issues caused or complicated by the lockdown.

Pranav reckons he wouldn’t have conceived the story if it weren’t for the pandemic. “When the lockdown started, I was observing the people around me. I found their behaviour amusing. I noted them down. After the pandemic is over, I don’t think we will be feeling the same way we are feeling now. So, I wanted the show to be a time-stamp of the strange times we live in.”

The three episodes were written, shot and released across six months. Each episode reflects a different phase of the lockdown. For instance, in the third, an apartment security guard watches news on a TV hanging from a balcony because its owner, knowing it’s China-made, tries to throw it away without unplugging it.

Making a screen-film might be inexpensive but, as Pranav and his crew found out while making Cabin Fever, it’s a logistical nightmare. “Half the challenge was to figure out a way to work with poor internet. The main actors never met each other [until the final episode]. It was hard for them. I am specific about the shots. None of the actions is random. So, they had to listen to my instructions, emote in a certain way, operate their phone cameras in certain angles… I haven’t been to Sanskriti’s house. So, I had to do a virtual recce of her house before the shoot.”

Despite the obstacles, Pranav enjoyed making the film. “It was something new for all of us. We had to kind of fight through the environment to make this. It was a beautiful process.”

For Ritviz, Cabin Fever was a way to explore other forms of storytelling than music. “As my channel hit a million subscribers, I wanted to give something special for my fans; not just a new song. That’s when I got the first draft of Cabin Fever. I fell in love with it. I knew this was what we were looking for.”

The characters of Cabin Fever struck a chord with Ritviz, who does a cameo in the series. “When Pranav said he’s going to stop at three episodes, I wanted him to make more. I want to know more about Jounty and Sanskriti.”

There’s only so much you can know about the characters through their screens. Pranav plans to delve more into these characters. “I want to tell their story in a bigger setting.”

Pranav, however, reckons the screen format isn’t merely makeshift. “It’s an interesting format. The way people are consuming content is evolving. The preference for a particular kind of content will keep changing.”

Not Conscious About My Image Getting Hampered on Bigg Boss, Says Jasmin Bhasin

‘Not aware of what Raj Kundra was up to’ – Read Shilpa Shetty’s statement...