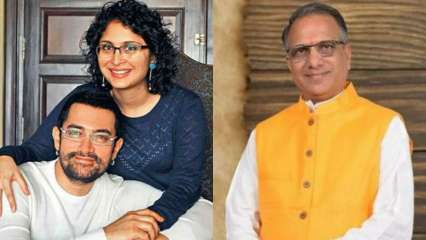 Sudhir Gupta, Bharatiya Janata Party (BJP) MP from Madhya Pradesh’s Mandsaur, has said that at the age of becoming a grandfather, Aamir Khan is looking for a third wife.

The politician, known for making bizarre comments, spoke to reporters on Sunday on the occasion of World Population Day.

“Aamir Khan left his first wife Reena Dutta with two children, Kiran Rao with one child and now, at the age of becoming grandfather, he is looking for a third wife,” CNN-News 18 quoted the BJP leader as saying.

“Those who claim that people like Khan have no brains for job other than selling eggs’ were correct,” he added.

Recently, one of the most controversial celebrities on social media, Kamaal R Khan aka KRK too took a dig at Aamir Khan when he said in a video shared on his YouTuber channel, that he always thought the superstar would marry some beautiful woman like Katrina Kaif or Fatima Sana Shaikh. Kamaal went a little below the belt and described Kiran Rao as an average-looking woman. He claimed that Aamir shouldn’t have released a fake statement talking about their blooming love and respect even during this time.

In the video, he also spoke about how Aamir Khan divorced both his first and second wives, Reena Dutta and Kiran Rao, after 15 years of marriage. He also said that Aamir Khan is not money-minded citing he walked out of his first marriage with Reena Dutta without any issue involving alumni. KRK added that Aamir even took the blame for divorcing his first wife and further said that this time too he must have settled the issue with Kiram amicably since he has no dearth of money.

Aamir Khan and Kiran Rao on July 3 took the film industry by shock when they announced their separation.  In a joint statement, they said that they are ready to start a new chapter in their life and hope that everyone sees ‘this divorce not as an end, but as the start of a new journey’.

“In these 15 beautiful years together we have shared a lifetime of experiences, joy and laughter, and our relationship has only grown in trust, respect and love. Now we would like to begin a new chapter in our lives – no longer as husband and wife, but as co-parents and family for each other,” the statement read.

It further read, “We request our well-wishers for good wishes and blessings, and hope that – like us – you will see this divorce not as an end, but as the start of a new journey. Thanks and love, Kiran and Aamir.”

A day later on July 4, the two even made a video appearance, where Aamir and Kiran sat next to each other and addressed their fans. Aamir said, “Toh aap logon ko dukh bhi hua hoga, achcha nahi laga hoga, shock laga hoga. Hum bas itna aapko kehna chahte hai ki hum log dono bohot khush hai aur hum ek hi parivaar hai (You all must be saddened and shocked by the news. We just want to tell you that we are very happy and we are a part of one family),” he said.