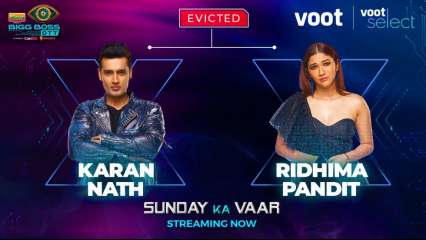 The second week of ‘Bigg Boss OTT’ has come to a conclusion. As the week draws to a close, Karan Johar’s ‘Sunday Ka Vaar’ kicks off.

Urfi Javed  was the first one to be elimenated last week and now Ridhima Pandit and Karan Nath have exited the house.

As the two exited, the contestants were overwhelmed with grief. It breaks Karan Johar’s heart to watch them go, according to him. Karan and Ridhima were known to be the house’s most adored couple.

The evening also featured two special guests. Rakhi Sawant met the candidates via television and performed a game in which she had to guess which vegetable each contestant resembled.

Hina Khan, on the other hand, enters the house and assigns a task to the other housemates.

In ‘Bigg Boss OTT,’ which will air on Voot, the ‘janta’ component has been incorporated. By allowing viewers to handpick candidates and determine their stay, tasks, and exit from the show, the new format will give the average individual OTT like powers.

This is the first time a special digital section has been included to the reality show. With the premiere of Season 15 of ‘Bigg Boss,’ the show will seamlessly transition to ColorsTv following the completion of the digital exclusive.

The reality programme is featuring a distinct digital section for the first time. Following the conclusion of the internet exclusive, Season 15 of ‘Bigg Boss’ will effortlessly move to ColorsTv.