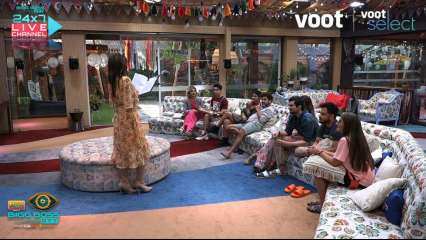 The day begins with Akshara Singh being asked to take up cleaning responsibilities because there are fewer staff. Akshara claims she is unable to do so because she is physically and emotionally ill. If allowed, Akshara tells her housemates that she will make her own food and clean her own dishes.

Shamita Shetty is attempting to reconcile her issues with Akshara. Shamita encourages Akshara to express her emotions. Shamita has always made Akshara feel as if she doesn’t exist for her, and that everyone makes comments about her now and then. Shamita confesses there are some things she doesn’t comprehend. She hugs Akshara and reminds her that she is not alone, and she asks her to break out of this emotional phase for her own sake.

Pratik Sehajpal informs Divya Agarwal, Akshara, and Millind Gaba that he will make everything available to them, but that they should do some work if they are able. Millind believes Pratik bowed down to their objection, while Divya and Akshara believe it was all part of a larger plan to make them appear decent.

Nishant Bhat holds Divya responsible for the mayhem that ensued because they misunderstood the objective and were forced to absorb the loss after Zeeshan Khan was evicted. Divya, on the other hand, is not convinced. Shamita, Neha, and Pratik are all in favour of Divya being punished. Divya slams Neha for claiming that her periods were the reason she didn’t do the housework. Divya’s captaincy, according to Neha, was on par with gunda gardi. Divya informs Neha that she has disliked her since Day 1 and admits that she talks about her freely rather than hiding her genuine intentions like others do.

Millind and Neha had a heated verbal spat because they are uncomfortable in each other’s company. While Millind admits that he felt at ease when Neha got extremely close to him and said he could feel his body, and she even admitted that she wasn’t wearing her underwear. Neha retaliates, claiming that it was all in good fun and that there was no need to be offended. Both Neha and Millind, according to Moose, were wrong in their own ways. Millind should have aired his dissatisfaction right then and there, according to Pratik, and the rest of the house disagrees except for the Boss Man and Boss Lady

Divya refuses to take the ‘Dand,’ and as a result, the entire house is punished. Because Divya declined, Shamita and Raqesh refuse to accept the ‘Dand’ (Punishment). Everybody in the house is trying to come up with a strategy to cope with Divya. Raqesh declares that he will bury all of Divya’s stuff.

The episode ends with a scene where Neha Bhasin can be seen sobbing as she lays on the garden bench.