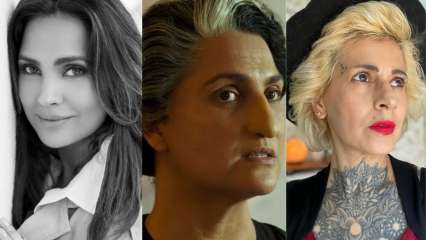 The power-packed and impact trailer of the highly anticipated film ‘BellBottom’ was released on August 3. While people were excited to see Akshay Kumar, Huma Qureshi and Vaani Kapoor in action, it as Lara Dutt’a dramatic transformation into Indira Gandhi that left netizens stunned.

Social media has been abuzz with praises for Lara and the makeup artists for the outstanding transformation results. However, it seems like celebrity hairstylist Sapna Bhavnani was not too impressed by Lara’s hairstyling and said we are nowhere close to mastering hair techniques yet.

On Wednesday (August 6), film critic Raja Sen took to Twitter and shared a still of Lara Dutt as Indira Gandhi. While sharing the photo, he tweeted, “Lara Dutta as Mrs Gandhi in #Bellbottom. Wow. (Also, why?) Impressive make-up and prosthetics, not at all overdone.”

Reacting to Raja’s tweet, Sapna Bhavnani wrote, “Such a bad wig though can see the lining of it. But ofcourse you wouldn’t as you’re not a hair person. We haven’t come close to mastering hair yet.”

Such a bad wig though can see the lining of it. But ofcourse you wouldn’t as you’re not a hair person. We haven’t come close to mastering hair yet .

Sapna then shared the photo while highlighting Lara’s wig. She tweeted, “See this white glaring wig line .. natural hairlines are not like this at all.”

See this white glaring wig line .. natural hairlines are not like this at all ..  pic.twitter.com/w23oA4Dwkm

Agreeing with Sapna, a Twitter user commented, “That’s Lara Dutta?! Everything save for the wig is stellar.”

On Thursday (August 5), Lara Dutta and Akshay Kumar shared a BTS video of her transformation. Akshay even lauded the actress and said, “you’ve nailed it, and how”.