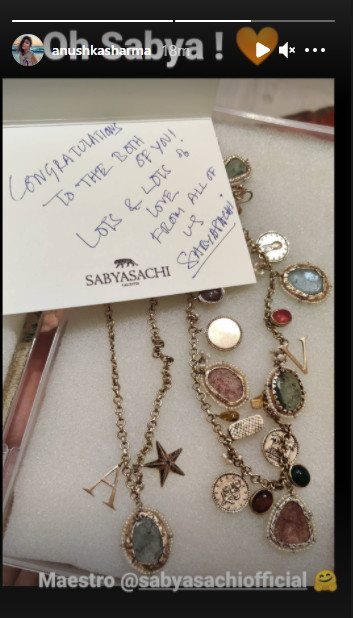 Celebrity couples who are constantly under the media spotlight, find different ways to express love for one another. While some take to social media to share mushy photos, get matching tattoos and miss no opportunity to shower praise and love in the comments section of his/her partner’s posts, there are some couples who do not prefer PDA and rather have more subtle ways of showing love like having initials of their names carved on some piece of jewellery.

Of late, actress Anushka Sharma has been sporting a charms necklace that has caught our attention.

If one goes through Anushka’s latest photos on her Instagram handle, as well as some selfies that she shared recently on Instagram Stories, one will spot the same personalised golden charms necklace around her neck. Anushka, who is currently in England with cricketer-husband Virat and their 6-month old baby Vamika, has dropped several such photos recently, sporting the same pendant which has now caught our attention and we are intrigued as to what all it comprises.

Take a look at Anushka’s photos sporting the neckpiece here:

For the unversed, the stunning piece of customised jewellery was gifted to Anushka Sharma by the ace designer and the actress’s close friend Sabyasachi, while she was pregnant with Vamika. She even wore it for her pregnancy photoshoot with Vogue magazine.

Created in a Victorian style in gold and adorned with semi-precious stones, interestingly, Anushka’s neckpiece has her initial ‘A’ and that of Virat’s ‘V’ in gold. Coincidentally, the initial ‘V’ now also stands for the couple’s daughter, Vamika. Amazing coincidence, isn’t it?

Upon receiving the gift, Anushka had shared a photo thanking Sabyasachi for the thoughtful present. She also gave a glimpse of the note that Sabysachi attached with the gift. “Congratulations to both of you. Lots and lots from all of us. Sabyasachi.” His message was a part of the congratulatory messages that poured in for the couple when they announced their pregnancy.

Take a look a closer look at the photo of the neckpiece here:

Anushka Sharma and Virat Kohli, who secretly tied the knot in 2017, welcome baby girl Vamika in January this year. They recently shared adorable photos from a picnic in a park, celebrating Vamika’s six-month birth anniversary.