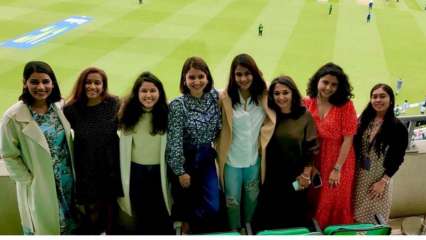 Anushka Sharma who has been in London for the past two months with her daughter Vamika has shared a photo with the wives of Indian cricketers wife Sanjana Ganesan, Pratima Singh and others, Anushka is accompanying husband and Indian cricket team captain Virat Kohli for India’s match against England.

Anushka had posed with the ladies in the stands as they got ready to watch the 4th test match between India Vs England on Thursday (September 2). The photo was shared by Ishaant Sharma’s wife Pratima Singh and featured Anushka, Jasprit Bumrah’s wife and TV presenter Sanjana Ganesan, Mayank Agarwal’s wife Aashita Sood, Ravichandran Ashwin’s wife Prithi Narayanan and bowling coach Bharat Arun’s wife, Anitha Arun among others.

For the match day, Anushka was dressed in blue top paired with dark blue jeans and white shoes. The ladies posed with wide smiles for the camera. While sharing the picture, Pratima captioned the post as, “Back with the ladies !!!”

Fans reacted to the photo and showered the WAGS of Indian cricketers. “Omggggg,” wrote one user while another commented, “Anushka why are you so pretty.” A this user wrote, “Omggggggg,” while a fourth user commented, “Lovely god bless all of you.”

The ‘Zero’ also reshared the photo on her Instagram story. Recently, Anushka and Virat had visited a vegan and an Indian restaurant in Leeds. Photos from their outing had gone viral on social media. On a related note, Anushka had taken off to the UK with her husband Virat and daughter Vamika, in July. Since then, the ‘PK’ actor has been sharing pictures from her English countryside getaway. The star couple had also celebrated Vamika’s six-month birthday in London.