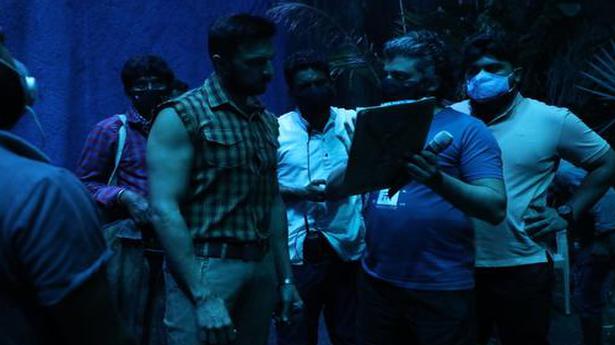 The on-going drug scandal has cast a pall of gloom over the Kannada film industry and most celebrities have retreated to their homes. There is however a ray of hope emanating from the sets of Phantom in Ramoji Film City, Hyderabad.

Written and directed by Anup Bhandari (of RangiTaranga fame), Phantom has Kichcha Sudeep in the lead. While the director refuses to divulge details of a film he calls “a dream project”, he does, however, offer us glimpses of what is happening on set. The techie-turned-director, who is also a music composer and lyricist, talks to MetroPlus about the film. Excerpts:

When did you resume shooting?

We started in June. We have been working non-stop. We are done with a major portion of the shoot in a forest.

In the studio or on location?

It was all in the studio. We created a massive forest on two floors in Annapoorna Studios in Bengaluru. We are done with that portion. Now we have created another set in Ramoji Film City, where we just completed a 10-day night shoot. We are building a new set that will be ready soon, and the shoot will resume.

How has the shooting experience been with social distancing norms?

Initially it was tough. There is always a fear lurking when we are working in a group. We have to be extra careful. The health guidelines and protocols were followed before every shoot. Now we are used to it and sail through the procedures making sure we are all safe. I believe it is important to get back to a normal life now.

Do you think theatres will open by the time Phantom is ready?

Definitely. I am pretty sure that theatres will be up and running. We are done with 50% of the shoot. There is still a lot to be done. By then, I believe things should be back to normal.

What is Phantom about?

The film spans multiple genres. I describe it as an action-adventure-thriller. It is an original story I wrote. The film is produced by Shalini Arts, Jack Manju’s production house. He is one of the biggest distributors in the Kannada film industry and Sudeep’s manager.

Are you not composing the music?

I am involved with Ajneesh Lokanath, the composer, at every step. I wanted him to score the music as he is one of the best in the industry. I also felt it will be a refreshing change to have him composing for my film.

What is Sudeep’s role in the film?

He plays Vikrant Drona, a rugged character. Vikrant is mysterious and no one can figure out what he does and why he does certain things.

Your brother Nirup is also acting in this film…

Yes, and we are also introducing Neeta Ashok. She is making her début and is paired opposite Nirup.