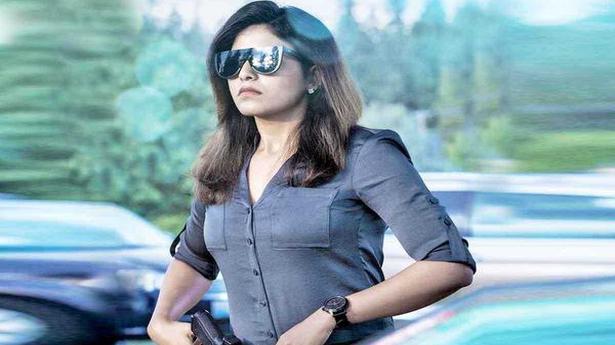 Anjali was hitting the gym consistently, to get fitter for her Tamil films Sindhubaadh and Naadodigal 2. Around the same time she was offered the part of Maha, a Seattle-based cop for the Telugu film Nishabdham (Silence in Tamil, Malayalam and Hindi). She took to the gym with renewed vigour, working out for three hours or more each day and adhered to a protein-rich diet. “For nearly a month I ate a lot of egg whites. I put in a lot of effort to look perfect for the part,” Anjali says, speaking ahead of Nishabdham’s digital release on October 2 on Amazon Prime Video.

Director Hemanth Madhukar’s thriller starring Anushka Shetty and R Madhavan has Anjali and Hollywood actor Michael Madsen following the trail of a missing young woman. “There was nothing for me to say no to this film. I liked how my character, Maha, was written and narrated to me. And I thought why not give this a try and go all out to be a stylish cop,” says Anjali.

She was trained by a Hollywood team for the stunt sequences and to imbue the body language of the American cop. They took into consideration her character’s backstory — where she hails from and how she would fit in as the crime detective in Seattle’s police department: “Each day I would be trained for 45 minutes to an hour and the Hollywood team would be on set to guide me when I had to do stunts. The way I talk, walk, hold or fire the gun, run… everything mattered. A lot of thought went into making Maha.”

Anjali binge watched Hollywood films that had female cops because she didn’t want to go to the sets unprepared. But after a point, she decided not to get overwhelmed with all the films she watched. She wanted to do it her way, and deliver something new and fresh.

There were times when she would return to the hotel after a day-long outdoor shoot in the US and head straight to the gym. “I barely had two months or so to get in shape for the role and I continued my fitness routine during the shoot,” she says.

Acting alongside Michael Madsen who also plays a cop, Anjali commends how he made his scenes look effortless: “He would talk to the camera just like he’d talk to me or the director when the camera is not around. I was nervous for a couple of days when I started shooting with him, given his work and fame in Hollywood. He was very friendly and made me feel comfortable on set.”

Having done several Tamil and Telugu films, it wasn’t an ordeal to shoot simultaneously in both languages for Nishabdham. However, Anjali concedes that dubbing was at times tricky: “We would shoot each scene in both languages. With dubbing, we focused on one version completely and dubbed for the other language only after the first one was completed. Sometimes I would slip into the second language.”

She’s glad she got to be a part of an ensemble cast that includes Anusha, Madhavan, Shalini Pandey and others and mentions that when she saw the film finally, she was impressed with how each of the actors performed in their distinct styles.

Next, Anjali will be seen in Vakeel Saab, the Telugu remake of Pink starring Pawan Kalyan. “I am very picky and it’s not always that one gets good parts in films made by good teams. So when opportunities come by, I grab them. I’m happy I got to do some interesting films like Seethamma Vaakitlo Sirimalle Chettu, Balupu, Geetanjali and now Nishabdham and Vakeel Saab.”

Throwback Video: When Abhishek Bachchan opened up about his ‘cosmic connection’ with R Madhavan