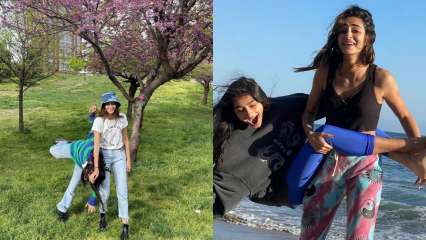 The bond between siblings is like no other. Brothers and sisters are each other’s first best friends. The Bollywood industry also has several examples of siblings who are extremely close to one another. One such duo is Chunky Panday and Bhavana Panday’s daughters, Ananya and Rysa.

Ananya Panday on Monday (July 26) shared a bunch of hilarious photos with her sister Rysa Panday. The photos have caught candid moments between the two. In the pictures, Ananya and Rysa can be seen falling off each other, giving a peck on the cheek, hugging and most of all, having a blast with each other.

While sharing the photo, Ananya wrote, “Literally any picture Rys and I have together :)”

Fans also reacted to the photos with love and laughing emojis. “CUTYYIEESS,” wrote one user while another commented, “My favourite.” A third user wrote, “u two are the cutest one,” while a fourth one commented, “I can relate to rysa here,” with a laughing emoticon.

Ananya often shares photos with her family. The actress recently lost her grandmother and penned a heartfelt note to mourn her demise. Ananya shared a set of throwback photos with her grandma and cousins and wrote, “rest in power, my angel when she was born the doctors said she wouldn’t live beyond a few years because of a defected heart valve, but my Dadi lived and how. She worked every day up until the age of 85, going to work at 7 am in her block heels and red streaked hair. She inspired me every single day to do what I love and I’m so grateful to have grown up basking in her energy and light. She had the softest hands to hold, gave the best leg massages, she was a self proclaimed (and very politically incorrect) palm reader and never ever failed to make me laugh. The life of our family. You’re too loved to ever be forgotten Dadi – I love you so much.

On the work front, Ananya Panday will next be seen in Vijay Devarakonda starrer ‘Liger’. The Puri Jagannadh directorial will also mark her debut in Telugu cinema. She also has one untitled project with Deepika Padukone and Siddhant Chaturvedi in the pipeline.