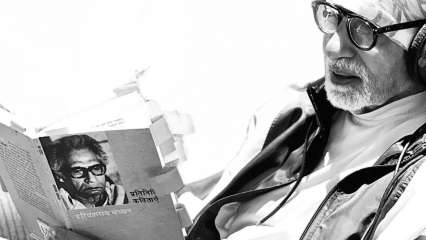 Amitabh Bachchan has kept his father Harivansh Rai Bachchan alive in his memories. He cherishes moments spent with him and reads his writings quite often. The actor constantly returns to his father’s work and smiles as remembers him. Many of his works have been voiced, and he enjoys listening to and reading them. He posted a photo to Instagram on Thursday in which he can be seen admiring his father’s writings.

Sr. Bachchan also wrote his emotions in his blog.

He said, “Never to keep distant the works of dear Babuji  .. ever near and in the company now of all that was observed and heard and time spent with .. it is a wonder how much of the earliest remains with one .. and the recent from the years or days of hours just passed – a failure in the exercise of remembrance.”

He added, “the look of reverence .. of the mind .. of the greatness and his genius .. all put together in that one night of stimulated rendition and never the satisfaction of it .. the need and desire of wanting to do it again .. till it falls into the space of the right tone graph and sentiment.”

Amitabh also hinted that the fans will be treated with something soon. He wrote, “this was but the night before and the work that finished late ended up in the work with Babuji, not for any personal pleasure – yes it always is, but the work with Babuji has a different connotation which I do hope in the days to come shall confront you and with the hope that it shall be received with the grace with which it was rendered.”

‘Chehre,’ ‘Jhund,’ ‘Brahmastra,’ ‘Mayday,’ and a remake of the Hollywood film ‘The Intern’ are among Amitabh Bachchan’s next projects, along with an untitled film starring Prabhas and Deepika Padukone. He recently finished filming ‘Goodbye’, which also stars Rashmika Mandanna and Neena