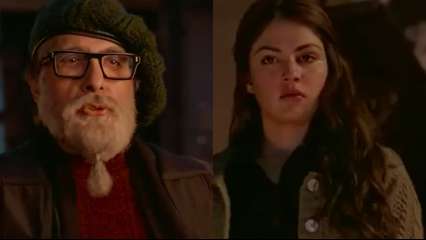 Amitabh Bachchan recently uploaded a snippet from his recent film ‘Chehre’, in which he delivers a monologue.

The speed with which he speaks and acts amplifies the impact of his statements.

On August 27, the film ‘Chehre’ was released in theatres. The film has received mixed reviews from reviewers and the general public.

Rumy Jafry had opened out about bringing Amitabh and Emraan together for the project in an interview with ETimes. He said, “After we finalised Amitabh Bachchan for ‘Chehre’, we started looking for other actors. I was looking for the second lead and Emraan fit right into the character I had envisioned. Even though I had never worked with him before, I had heard a lot about him in the industry. He is truly like Amit ji when it comes to professionalism–dedicated, hardworking and allows nothing to interfere with his work. He is very involved in the work he does. I wanted somebody just like him. When I approached him with ‘Chehre’, he, too, loved his character and was happy to come on board. Emraan’s work has turned out to be even better than I expected.”

For the unversed, in addition to Amitabh and Emraan, the film also stars Rhea Chakraborty, Annu Kapoor, and Krystle D’Souza.