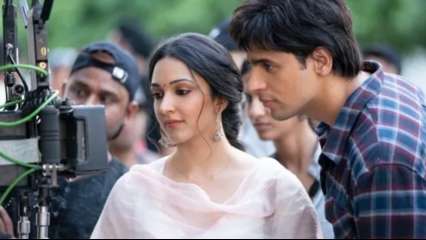 Since the last few months, Kiara Advani and Sidharth Malhotra had been rumoured to be dating. The two are frequently seen together, leading to speculation that they are a couple.

The stars haven’t commented on the rumours, so they’re still labelled as ‘just friends’.

In an interview with Etimes, Kiara recently spoke about her bond with Sidharth and how he is professionally.

“As a co-star, Sidharth is extremely driven and focused. He loves to prep a lot and does a lot of readings. That’s very similar to the way I like to work on a film. So, in that sense, we got along very well. As a friend, I’d say he is one of my closest friends in the industry. I think, even as a friend, he’s full of life and always fun to be around”.

When asked about how her career is right now, she told the leading daily that she always wanted it to be like this.

She said, “I feel like I always wanted to be working with the people I am working with today or the directors I am working with and there’s a long list of people I am looking forward to work with. But I think also just being offered the kind of roles that I am being offered today, is very exciting. As an actor, you have to keep doing different roles and not get typecast. When directors come to you with different roles, it’s interesting because sometimes even you don’t see yourself in some of those roles but they have the confidence in you and that automatically gives you the confidence. Even when I did ‘Guilty’, or when I did a Monica from ‘Good Newwz’–I give full credit to these directors who had that faith that I would pull it off because the roles and films that they had seen of mine before, were very different. I am happy that I have been able to prove my versatility as an actor and I have been getting some interesting roles to portray in the last couple of months and even the ones that I am doing now. So, yes, it’s a great time to be an actor in the industry”

Sidharth and Kiara are now working on their first film together, ‘Shershaah’. It’s based on the life of Captain Vikram Batra, a Param Vir Chakra awardee and Kargil martyr. On August 12, Amazon Prime Video will release the film.