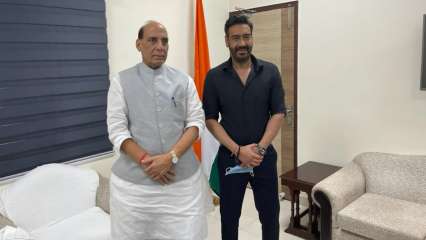 Actor Ajay Devgn met India’s Defence Minister Rajnath Singh on the release day of his film ‘Bhuj: The Pride Of India’, which will take you back to the golden pages of Indian history to know the story of our victory during the Indo-Pak war in 1971.

The actor shared a picture with Rajnath Singh on his Instagram handle and informed his followers that the union minister had seen some clips of his new film.

In the caption, he wrote, “Honoured to meet the Honourable Minister of Defence, India, Shri Rajnath Singh ji. He saw some clips of Bhuj: The Pride of India. For me, it was a befitting platform to showcase the film that captured India’s victory over Pakistan 50 years ago. Jai Hind.”

‘Bhuj: The Pride of India’ is inspired by the journey of Indian Air Force Squadron Leader Vijay Karnik and his attempt to rebuilt the IAF airbase with the help of 300 women from the local villages, during the India-Pakistan War of 1971.

On the occasion of his film’s release, Devgn spoke to ANI about the movie’s “beautiful story” and the “beautiful sacrifices of arm forces and combination of 300 women who supported the armed forces.”

“Only because of their collective effort we won, otherwise we would have lost kutch completely,” he said. While explaining about uniform and its pride, the ‘Singham’ actor said, “Uniform has its own dignity. As soon as you wear it your mindset changes, your thought process changes, your body language changes, sets of pride and dignity comes into you.”

Talking about creating a visual experience like ‘Bhuj: The Pride of India’, he said, “It was a difficult film, you would have not seen something like this in our country. This is the first time we have reached a scale like this. It was a collective effort, everyone was together and we were all working hard, all the technicians.”

Calling his meeting with Rajnath Singh, a great one, Devgn added, “I thought this was the right thing to do. We wanted him to see the film to show where we have reached technically.”

Rajnath Singh also shared a tweet after meeting Devgn and wished the B-town star success for his future projects.”Met with renowned Hindi Film actor @ajaydevgn today. He is a wonderful actor and a good human being. He has made a film depicting the heroic efforts of the Indian Armed Forces during the 1971 war. I wish him success in his future endeavours,” he said.

Devgn retweeted Singh’s tweet on his Twitter handle and along with it wrote, “Thank you Sir for your encouragement and time. It means a lot to me and the Team of Bhuj: The Pride of India.”

Honoured to meet the Honourable Minister of Defence, India, Shri Rajnath Singh ji. He saw some clips of Bhuj:The Pride of India. For me, it was a befitting platform to showcase the film, that captured India’s victory over Pakistan 50 years ago. Jai Hind @rajnathsingh pic.twitter.com/CL49opdbIu

(With input from ANI)

Sonakshi Sinha gives hilarious response to fan who proposed to her on Instagram, asked photo of her feet