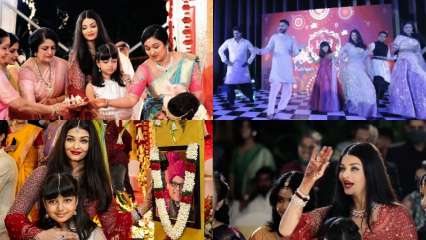 Aishwarya Rai Bachchan seldom posts things on her social media and when she does, it takes the internet by storm. Recently, the actor, her husband Abhishek Bachchan and daughter Aaradhya Bachan attended her cousin Shloka Shetty’s wedding and a video of their celebrations has gone viral on social media.

In the video montage, one can see the wedding functions taking place with south Indian traditions and rituals. The video further shows the festivities and the bride talking about her decision to get married.

The video then shows Aishwarya and Aaradhya performing a puja. The little one looked adorable in a white lehenga choli while Aishwarya looked stunning as usual in a red suit. The bride also looked breathtaking in a golden coloured saree and matching jewels for her wedding.

Another snippet from the video shows Aishwarya applying tika (vermilion) on Shloka’s forehead and also hugging her. The montage also shows videos from what seemed to be the wedding reception. The bride and groom can be seen shaking a leg with Aishwarya, Aaradhya and Abhishek. While the actress was dressed in a white shimmery gown, Aaradhya wore a red dress and Abhishek looked dapper in a white kurta pajama. The group was performing the hook step of the song ‘Desi Girl’.

Apart from the video, photos of the wedding also surfaced on social media. The photos feature, Aishwarya and Aaradhya. In the caption, it was described that when Shloka got emotional during her vidai ceremony, it was the nine-year-old who comforted her.

“Ever since the thought of their daughter’s wedding comes in their mind, parents know consciously or subconsciously, that one day she will go to another family to create a new world. But it must be during the vidai that this truth dawns in entirety. At that moment, in @shlokasshetty ‘s vidai, comfort for @sulatha.shetty Aunty came in Aaradhya’s sweet voice, “Don’t cry, I’m there na,” read the caption by Monks In Happiness, who seem to be the official photographers of the wedding.

They further added ““On a separate note, the unpredictable nature of life takes away from us, someone who we would have wanted by our side in the most important moments of our life. Late Sh. Krishnaraj Rai (@aishwaryaraibachchan_arb ‘s father) was such a person for Shloka and her family. Present in spirit, his blessings most certainly are with Shloka, Karan and their families.”

Meanwhile, on the work front, Aishwarya is currently shooting for Mani Ratnam’s magnum opus ‘Ponniyin Selvan’. The film is slated to release in two parts and the first part will hit the screens in 2022.