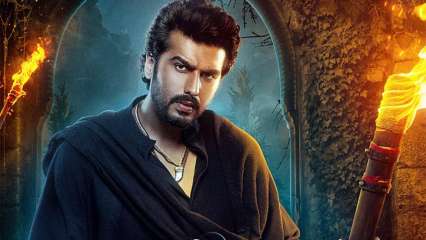 The makers of ‘Bhoot Police’ revealed the first-look poster of Arjun Kapoor’s character. He is playing the role of ‘Chiraunji’ in the film.

Sharing the poster, the official Twitter handle of Tips Films and Music wrote, “Unravel the mysterious door of supernatural powers with laughter! Meet CHIRAUNJI in #BhootPolice. Coming soon on @DisneyplusHSVIP.

Arjun can be seen slaying a badass look in the poster. He is wearing an oversized black outfit with a knife-shaped pendant and studded rings. Giving an intense look, he is carrying a fire stick in one hand.

Fans loved his look and are eagerly waiting to know more about his role.

For the unversed, Saif Ali Khan’s look was also introduced earlier today. The poster was shared by his wife Kareena Kapoor Khan. He will be playing ‘Vibhooti’ in the movie.

Arjun Kapoor, Yami Gautam and Jaqueline Fernandez also shared the first look on their respective Instagram accounts. The forthcoming horror-comedy was earlier scheduled for a theatrical release on September 10. However, the makers reportedly confirmed its digital release in June. ‘Bhoot Police’ was shot in Himachal Pradesh late last year.

The upcoming film is helmed by Pawan Kripalani, who has earlier directed films like ‘Ragini MMS’, and ‘Phobia’. The film will trace the story of a group of ghost hunters and their hilarious adventures. ‘Bhoot Police’ marks the first collaboration between Saif and Arjun, who is currently dating Kareena’s best friend and actor Malaika Arora.

Produced by Ramesh Taurani and Akshai Puri. Apart from ‘Bhoot Police’, Saif will also be seen in Prabhas’ ‘Adipurush’. In Om Raut’s directorial, Saif will play the role of Ravana. Saif, who last appeared in the Amazon Prime Video series ‘Tandav’, also has ‘Bunty Aur Babli 2′ in the pipeline