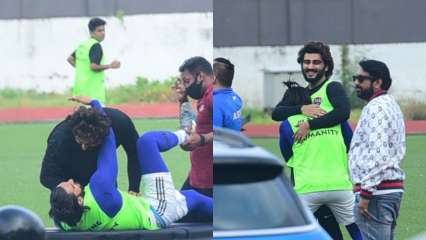 A few weeks ago, Ranveer Singh and Mahendra Singh Dhoni’s bromance videos and photos went viral on social media. Now, the actor has yet again dominated the webspace as his bromance video with actor Arjun Kapoor is breaking the internet.

Arjun Kapoor and Ranveer Singh had gone for their weekly friendly football practice wherein between the game they were snapped by the paparazzi. In the video that is now going viral, Ranveer can be seen lying on the stretcher as Arjun bends and hugs him. The two indulge in a long hug and seemed to be talking about something.

In another shot, the two actors can be seen standing and hugging each other. While Ranveer’s face was hidden, Arjun had a big grin on his face as he spoke. Arjun and Ranveer’s camaraderie has been tight ever since they worked together in the 2014 film ‘Gunday’ which also starred Priyanka Chopra and Irrfan Khan.

Reacting to the video, fans posted hilarious comments thinking that something funny is brewing between the two actors. “Dostana2 ki shooting chal rahi hai,” sad one user while another commented, “@deepikapadukone and @malaikaaroraofficial are having a serious conversation right now (laughing emoji).”

A third user commented, “I thought he was dying and giving kiss of life,” while a fourth user wrote, “rulaa diya bas kro.” Well we certainly like to see our favourite actor indulge in some playful banter.

On the work front, Ranveer Singh have several big projects in his pipeline. He will be seen in ‘Sooryvanshi’. ’83’, ‘Jayeshbhai Jordaar’ and ‘Cirkus’. Meanwhile, Arjun who was last seen in ‘Sardar Ka Grandson’ is gearing up for the release of his film ‘Bhoot Police’. He also has ‘Ek Villain Returns’ in his kitty.