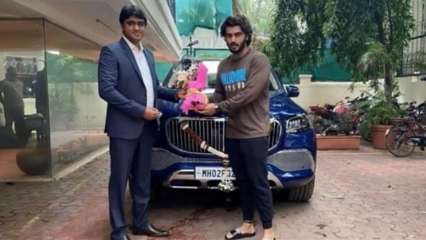 Bollywood star Arjun Kapoor is known for his love of SUVs. Just a few months after he added a Land Rover Defender to his garage, Arjun has again purchased a new luxury car. The actor has become the proud owner of a Mercedes-Maybach GLS 600 which is worth a whopping Rs 2.43 crores. Earlier this year, Arjun was seen taking a ride in Ranveer Singh’s Maybach and it looks like he was super impressed with the car.

Arjun’s swanky new ride comes in the monotone Cavansite Blue shade and a 2911 number plates, which if reports are to be believed is a combination of his father Boney Kapoor and sister Anshula Kapoor’s birth dates – December 29 and November 11 respectively.

Arjun’s photo with his brand new ride has surfaced on social media. Have a look:

In terms of design, the bumper, nose and sides of the car come with heavy chrome inserts. The car had added LED headlamps, 22-inch alloy wheels and the regal all-chrome Maybach grille. The car can seat upto four people in the cabin with individual seats providing the best of comfort.

Meanwhile, on the work front, Arjun Kapoor will soon be seen in ‘Bhoot Police’ which also stars Saif Ali Khan, Yami Gautam and Jacqueline Fernandez. He also has ‘Ek Villain Returns’ in the pipeline.