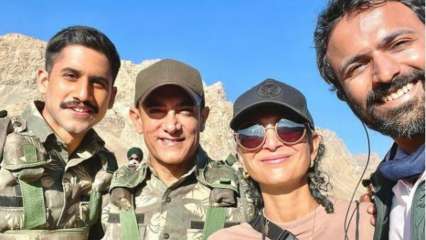 After coming under fire for allegedly ‘littering’ in Ladakh while shooting for ‘Laal Singh Chaddha’, the Hindi adaptation of Tom Hanks’ ‘Forrest Gump’, Aamir Khan’s production house has now issued an official statement debunking the allegations.

In a statement released on Aamir Khan Productions’ (AKP) official Instagram handle, the makers of the film stated that all the accusations against the actor and his crew were untrue and that they were making sue that when they leave a location they leave it clean or cleaner than they found it. The statement also mentioned that the location that they are shooing at was open to relevant authorities to carry out checks anytime.

The statement read, “To whomsoever, it may concern, AKP would like to clarify that as a company we follow strict protocols for cleanliness in and around our shooting spaces. We have a team that makes sure that the location is kept trash-free at all times. At the end of the day, there’s a recheck of the entire location. At the end of the entire schedule, we make sure that when we leave a location, we leave it as clean or cleaner than we found it.”

“We believe that there are some rumours/allegations about our location not being kept clean. We strongly deny such claims. Our location is always open to relevant local authorities to carry out checks anytime they like,” concluded the statement released by Khan’s production house.

For the uninformed, a social media user by the username Jigmat Ladakhi had earlier shared a video on Twitter, showing the entire area littered with used plastic bottles. He criticised the “gift” Khan’s ‘Laal Singh Chaddha’ had “left for the villagers of Wakha in Ladakh.” He even pointed out that the actor propounds environmental cleanliness on his social awareness show ‘Satyamev Jayate’ but when it comes to him, he doesn’t follow what he preaches.

The user wrote, “This is the gift Bollywood star Amir Khan’s upcoming movie Lal Singh Chada has left for the villagers of Wakha in Ladakh. Amir Khan himself talks big about environmental cleanliness at Satyamev Jayate but this is what happens when it comes to himself.”

On a related note, Aamir Khan recently announced his separation from his second wife Kiran Rao. However, a recent photo of the two from the ‘Laal Singh Chaddha’ sets in Ladakh where they were accompanied by South superstar Naga Chaitanya had gone viral on the internet.

Naga will be seen making his Bollywood debut with the upcoming film.

The movie will reportedly unfold some of India’s historic events as seen through the eyes of a man with a low IQ. Reportedly, Shah Rukh Khan and Salman Khan will also appear in cameo roles in the upcoming film. Being touted as the most anticipated release of this year, the upcoming movie is slated to hit the big screens on Christmas.