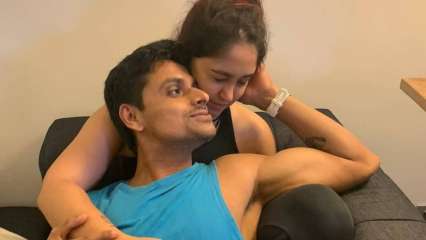 Ira Khan recently took to her Instagram and shared new pictures with her boyfriend Nupur Shikhare. She can be seeing cuddling him while Nupur makes funny faces.

With her arm around his neck, the two are couple goals in the photos.

“He’s such a dramebaaz! #love #cuddles #happypill,” she captioned her post

Ira’s friends and netizens took to the comment section and showered the two with love.

During Valentine’s Day week, Ira announced her love with Nupur on Instagram. On Promise Day, she shared several photos with him and wrote, “Its an honour to make promises with and to you… #hi #whaleyoubemine #myvalentine #buddy #yourebetteratcheesylines #dreamboy.” She later posted pictures of her at-home Valentine’s Day celebration with him.

Earlier, in an interview, Ira had told Hindustan Times, “I’ve always felt more comfortable and enthusiastic about working off-stage or behind the camera rather than [being] in front of it. I’ve never felt the inclination to act except if it were in an action film, so I get to learn all the cool stunts. Then again… I can just learn how to do the stunts without a film to work on.”

Nupur and Ira are often papped together as they hang out or step out of the house to run errands.

For the unversed, Ira made her debut as a theatre director a few years ago. She directed the play Medea with Hazel Keech in the lead.