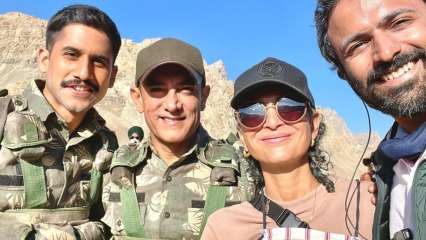 Aamir Khan and Kiran Rao have now appeared in a selfie shared by south star Naga Chaitanya a few days after announcing their split after 15 years of marriage. The 34-year-old actor co-stars with Aamir Khan in Aamir Khan Productions’ next film Laal Singh Chaddha, which is a joint production of Aamir and Kiran Rao.

In Naga Chaitanya’s post, Aamir and Kiran can also be seen posing with the film’s director Advait Chandan.

Aamir Khan and Kiran Rao shared the same picture on the official Instagram account of their production house Aamir Khan Productions and they welcomed Naga Chaitanya onboard with these words: “Welcome Bala, stealer of hearts, you have already stolen ours. Love, Kiran and Aamir.”

The Aamir Khan starrer film, Laal Singh Chaddha welcomes Naga Chaitanya as a new member in the cast. The actor has joined Aamir Khan today as they commence shoot.

Renowned across the southern belt of India, will be essaying the role of Aamir Khan’s best friend in the film. Sharing an update on his official social media handle, Naga Chaitanya wrote, “Grateful… #Bala #laalsinghchaddha @aamirkhanproductions”

While the climactic scene rehearse took place a while ago, the shoot for began today in Kargil with Naga Chaitanya and Aamir Khan.

Laal Singh Chaddha is set to be the most anticipated film of the year, bringing the much-loved Aamir-Kareena duo back to the big screen after their smash success 3 Idiots. Naga Chaitanya is a welcome addition to the cast, and his admirers are looking forward to seeing him work alongside Aamir Khan.

The film is an official version of ‘Forrest Gump’, one of Hollywood’s most successful and award-winning films. The Aamir Khan film is set to hit theatres on Christmas this year, and it promises to be a cinematic delight.

Meanwhile, on the personal front, Aamir and Kiran recently released a joint statement and updated fans about their separation. In their statement, the couple said that they will raise their son together.

The statement read, “In these 15 beautiful years together we have shared a lifetime of experiences, joy and laughter, and our relationship has only grown in trust, respect and love. Now we would like to begin a new chapter in our lives – no longer as husband and wife, but as co-parents and family for each other. We began a planned separation some time ago, and now feel comfortable to formalise this arrangement, of living separately yet sharing our lives the way an extended family does. We remain devoted parents to our son Azad, who we will nurture and raise together. We will also continue to work as collaborators on films, Paani Foundation, and other projects that we feel passionate about. A big thank you to our families and friends for their constant support and understanding about this evolution in our relationship, and without whom we would not have been so secure in taking this leap. We request our well wishers for good wishes and blessings, and hope that – like us – you will see this divorce not as an end, but as the start of a new journey. Thanks and love, Kiran and Aamir.”